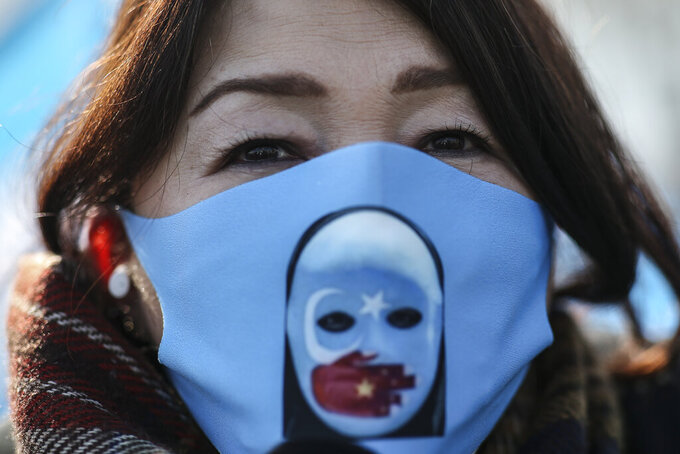 A protester from the Uyghur community living in Turkey, participates in a protest in Istanbul, Thursday, March 25, against against the visit of China's FM Wang Yi to Turkey. Hundreds of Uyghurs staged protests in Istanbul and the capital Ankara, denouncing Wang Yi's visit to Turkey and demanding that the Turkish government take a stronger stance against human rights abuses in China's far-western Xinjiang region. (AP Photo/Emrah Gurel)

The crowd gathered at Istanbul’s Beyazit Square, holding posters of missing relatives they believe are being kept in detention camps in China and chanting slogans against Beijing.

“We call on Turkey to stand with East Turkestan,” said Burhan Uluyol, who joined the protest in Istanbul. “We call on Turkey to not turn its back on our Uyghur people because of some economic benefit.” He was using the Uyghurs’ term of reference to their heartland in Xinjiang.

Uyghurs, a Turkic group native to China’s Xinjiang region, have sought refuge in Turkey for decades because of their shared cultural ties with the country. Once a champion of the Uyghur cause, Turkey has become less vocal about their plight in recent years as it has developed economic ties with China.

Initially, Beijing denied the existence of camps detaining Uyghur Muslims in Xinjiang, but has since described them as centers to provide job training and to reeducate those exposed to extremists. Chinese officials deny all charges of human rights abuses there.

After his meeting with Wang, Cavusoglu tweeted that the two discussed the potential for economic cooperation between their countries, and agreed to enhance their cooperation against the coronavirus and concerning vaccines.

Cavusoglu also said he had “conveyed our sensitivity and thoughts on Uyghur Turks.”

China recently ratified an extradition treaty with Turkey that was signed years ago, raising fears among the Uyghur community that they could be sent back to the country they fled. Turkey has yet to ratify the agreement.

Turkey has reached agreement with China’s Sinovac company to purchase more than 100 million doses of its COVID-19 vaccine. The agreement raised fears among Uyghurs over the possibility that Beijing could use the vaccines as leverage to win passage of the extradition treaty.

“If there is pressure, and the agreement is signed, we will be returned,” she said. “We are here (protesting) because we don’t want to end up in such a situation.

Both Turkish and Chinese authorities insist that the extradition bill doesn't aim to target Uyghurs for deportation.

Wang arrived in Ankara as part of a regional tour that is taking him to Saudi Arabia, Turkey, Iran, the United Arab Emirates, Oman and Bahrain.