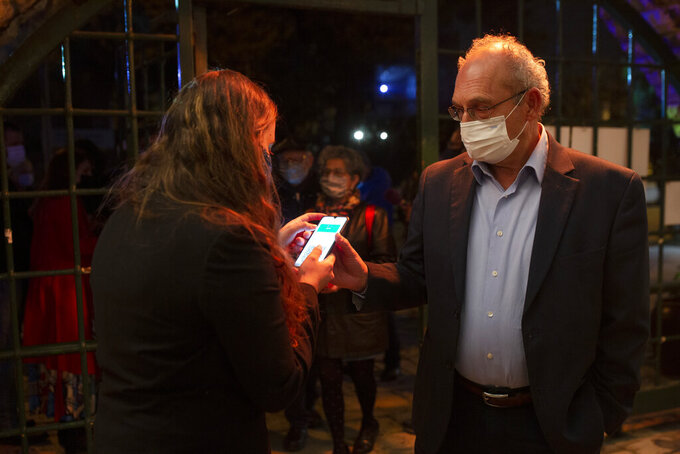 A man presents his "green passport," proof that he is vaccinated against the coronavirus, on opening night at the Khan Theater for a performance where all guests were required to show proof of vaccination or full recovery from the virus, in Jerusalem, Tuesday, Feb. 23, 2021. (AP Photo/Maya Alleruzzo)

TEL AVIV, Israel (AP) — Violet light bathed the club stage as 300 people, masked and socially distanced, erupted in gentle applause. For the first time since the pandemic began, Israeli musician Aviv Geffen stepped to his electric piano and began to play for an audience seated right in front of him.

“A miracle is happening here tonight,” Geffen told the crowd.

Still, the reanimating experience Monday night above a shopping mall north of Tel Aviv night was not accessible to everyone. Only people displaying a “green passport” that proved they had been vaccinated or had recovered from COVID-19 could get in.

The highly controlled concert offered a glimpse of a future that many are longing for after months of COVID-19 restrictions. Governments say getting vaccinated and having proper documentation will smooth the way to travel, entertainment and other social gatherings in a post-pandemic world.

But it also raises the prospect of further dividing the world along the lines of wealth and vaccine access, creating ethical and logistical issues that have alarmed decision-makers around the world.

Other governments are watching Israel churn through the world's fastest vaccination program and grapple with the ethics of using the shots as diplomatic currency and power.

Inside Israel, green passports or badges obtained through an app is the coin of the realm. The country recently reached agreements with Greece and Cyprus to recognize each other's green badges, and more such tourism-boosting accords are expected.

Anyone unwilling or unable to get the jabs that confer immunity will be “left behind,” said Health Minister Yuli Edelstein.

“It's really the only way forward at the moment,” Geffen said in an interview with The Associated Press.

The checks at the club's doors, which admitted only those who could prove they are fully vaccinated, allowed at least a semblance of normality.

“People can’t live their lives in the new world without them," he said. "We must take the vaccines. We must."

The vaccine is not available to everyone in the world, whether due to supply or cost. And some people don't want it, for religious or other reasons. In Israel, a country of 9.3 million people, only about half the adult population has received the required two doses.

There is new pressure from the government to encourage vaccinations. Israeli lawmakers on Wednesday passed a law allowing the Health Ministry to disclose information on people who have yet to be vaccinated. Under the policy, names can be released to the ministries of education, labor, social affairs and social services, as well as local governments, “with the purpose of allowing these bodies to encourage people to get vaccinated."

The government is appealing to the emotional longing for the company of others -- in Israel's storied outdoor markets, at concerts like Geffen's, and elsewhere.

“With the Green Pass, doors just open for you. You could go out to restaurants, work out at the gym, see a show,” read an announcement on Feb. 21, the day much of the economy reopened after a six-week shutdown.

Then it raised a question at the center of the global quest to conquer the pandemic that has hobbled economies and killed nearly 2.5 million people:

“How to get the pass? Go and get vaccinated right now.”

It's that simple in Israel, which has enough vaccine to inoculate everyone over 16, although the government has been criticized for sharing only tiny quantities with Palestinians in the occupied West Bank and Gaza.

Prime Minister Benjamin Netanyahu said this week he intends to send excess vaccine to some of the country's allies. Israel’s attorney general said Thursday night the plan has been frozen while he reviews the legalities.

Most countries don't have enough vaccine, highlighting the fraught ethical landscape of who can get it and how to lift the burden of COVID-19.

“There's a huge moral crisis in equity globally because in high income countries like Israel or the United States or the EU countries, we’re likely to get to herd immunity by the end of this year," he said. "But for many low-income countries, most people won’t be vaccinated for many years. Do we really want to give priority to people who already have so many privileges?”

Last April, the initiative known as COVAX was formed by the WHO, with the initial goal of getting vaccines to poor countries at roughly the same time shots were being rolled out in rich countries. It has missed that target, and 80% of the 210 million doses administered worldwide have been given in only 10 countries, WHO Director-General Tedros Adhanom Ghebreyesus said this week.

Ghana on Wednesday became the first of 92 countries to get vaccines for free through the initiative. COVAX announced that about 600,000 doses of the AstraZeneca vaccine arrived in the African nation. That's a fraction of the 2 billion shots the WHO aims to deliver this year.

As those countries begin vaccinations, wealthier nations are starting to talk about “green passport” logistics, security, privacy and policy.

The British government said it is studying the possibility of issuing some kind of “COVID status certification” that could be used by employers and organizers of large events as it prepares to ease lockdown restrictions this year.

Prime Minister Boris Johnson said the policy could cause problems.

“We can’t be discriminatory against people who, for whatever reason, can’t have the vaccine," he said.

Many countries around Europe are scrambling to develop their own vaccine certification systems to help revive summer travel, generating a risk that different systems won’t work properly across the continent’s borders.

“I think there is huge potential for not working well together,” said Andrew Bud, CEO of facial biometrics company iProov, which is testing its digital vaccination passport technology within the U.K.’s National Health Service.

But the technical knots around vaccine passports may be the easier ones to solve, he said.

The bigger challenges “are principally ethical, social, political and legal. How to balance the fundamental rights of citizens ... with the benefits to society.”