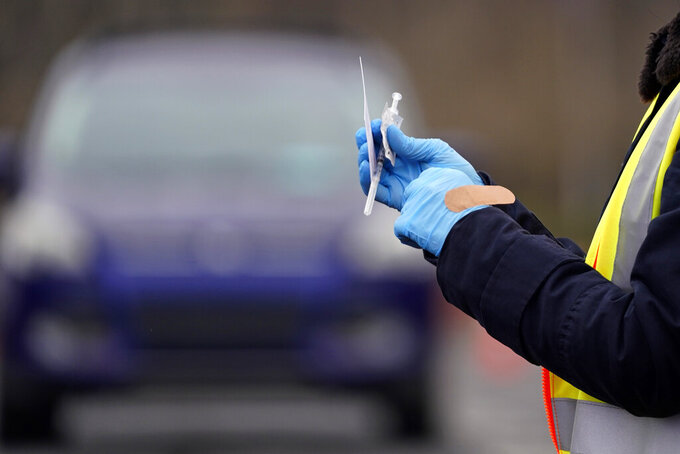 FILE - In this Feb. 11, 2021 file photo, a healthcare worker prepares to administer a COVID-19 vaccine at PNC Arena in Raleigh, N.C. North Carolina lawmakers on Wednesday, May 5 advanced a bill through a committee that would prevent state and local governments from punishing workers who choose not to get a COVID-19 vaccine. (AP Photo/Gerry Broome, File)

RALEIGH, N.C. (AP) — At a time when fewer and fewer North Carolinians are coming in for a COVID-19 vaccine, state health officials are examining ideas from other states to see what incentives might work to boost participation.

Among the proposals being actively discussed are savings account payments to younger adults — a group that has been less willing to get the vaccine, according to Mandy Cohen, secretary of the state Department of Health and Human Services.

North Carolina's top public health official said in an interview on Thursday that her team has looked into a new program in West Virginia, where the state's Republican governor recently announced that residents between the ages of 16 and 35 would be eligible for a $100 savings bond if they get the vaccine or have already gotten it.

Cohen's office said in a statement on Friday that it is also examining Detroit's Good Neighbor program, which launched on Monday to allow people to get $50 for every Detroit resident they sign up for a first vaccine dose and bring in for an appointment. The first $600 someone could earn from the program is nontaxable.

The development comes as North Carolina turns down tens of thousands of doses from the federal government, considers returning some of its supply to a federal pool for others to draw from and has nearly 1.2 million doses waiting for residents to take.

“The demand for vaccine is definitely lower,” Cohen said. “We know we're at that place where the folks who were incredibly eager, willing to drive 30 minutes, take time off work, we've gotten those folks vaccinated. We've gotten half of adults vaccinated. But we know that we need to make this more convenient, particularly those who can't take off from work.”

Cohen said many residents not presently vaccinated still have interest in the shot but just haven’t gotten around to scheduling an appointment or walking into a clinic. Others are persuadable and want answers to basic questions about how the vaccine is made. She believes the key to turning things around will be making shots more appealing to folks and more accessible than ever before.

“We need to move away from strictly appointment-based to walk-ins and sort of on-demand vaccination,” she said.

Last week, North Carolina saw the fewest number of people come in for first doses since December 2020, when supply was low and not made available to the general public. As of Friday morning, the state reported that fewer than 55,000 residents received an initial dose last week, which represents a 65% drop over the prior two weeks.

North Carolina Democratic Gov. Roy Cooper and state health officials have hoped an informational campaign of a return to summer and a commitment to abolishing the indoor mask mandate after two-thirds of adults have gotten at least one COVID-19 shot would resonate with unvaccinated residents, but they are noticing more steps may need to be taken soon.

Initially, Cooper and Cohen signaled the two-thirds threshold could be reached in June or July, though the timetable is ultimately in the hands of residents. If the pace of vaccinations holds steady, it won't happen until Halloween, state health officials say.

In the meantime, private businesses and other institutions are getting creative.

Square Burger teamed up this week with Eastern Carolina Medical Center Pharmacy and Avance Care Pharmacy to give a free hot meal to people who decided to get their shot at the Raleigh pop-up site.

The University of North Carolina at Greensboro gave out 10 free meal plans, 10 textbook scholarships and one grant to cover housing for the next academic year to vaccinated students.

A Charlotte brewing company last month partnered with Atrium Health to offer vaccines on site and reward folks who showed up with a free beer. New Jersey rolled out a statewide effort this week to allow any state resident who gets their first vaccine dose in May to enjoy a free beer.

“I want to claim that New Jersey did not create that idea,” Cohen quipped. “We've seen that here in North Carolina already.”

North Carolina’s health department said 140 organizations, agencies and businesses are signed up for the state’s Bringing Summer Back initiative. If residents want a swifter return to pre-pandemic life, they'll need to step up for a shot.