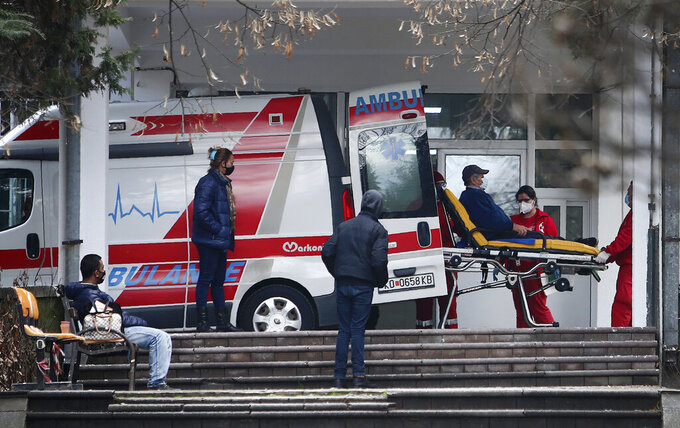 In this picture taken on Tuesday, Dec. 29, 2020, health workers wheel out a patient from an ambulance, at the entrance of the University Clinic complex in Skopje, North Macedonia. When thousands of people across the European Union simultaneously began rolling up their sleeves last month to get a coronavirus vaccination shot, one corner of the continent was left behind, feeling isolated and abandoned: the Balkans. (AP Photo/Boris Grdanoski)

SKOPJE, North Macedonia (AP) — As its neighbors boast of progress in their vaccination programs, North Macedonia is still waiting to deliver its first shot — adding political tension to the tiny nation's pandemic health crisis, and highlighting difficulties that some countries bordering the European Union are facing.

In a statement to The Associated Press, the country's government on Friday said plans to receive 8,000 Pfizer COVID-19 vaccines from neighbor Serbia this week had been held up for “technical reasons” with additional documentation needed for the transfer.

That handover had been expected Thursday with a ceremony planned at the Tabanovce border crossing that Serbian President Aleksandar Vucic had been due to attend. Vucic's office also said that more documentation was needed after the event was canceled.

That news has deeply frustrated North Macedonia which has yet to secure a single dose of COVID vaccine for its 2.1 million population.

The main conservative opposition party, VMRO-DPMNE, called on the center-left government to resign after the latest delay, adding that Prime Minister Zoran Zaev had been obliged to “beg” other countries for vaccines.

“This delay is the latest example of Zaev's incompetence,” the opposition party said.

North Macedonia is hoping to receive 840,000 vaccine doses this month under a scheme led by the World Health Organization to help poorer countries immunize their populations. But manufacturing delays in recent weeks have held up plans here and for some other EU neighbors including Ukraine and Moldova.

Earlier this week, North Macedonian authorities signed an agreement to procure 200,000 doses of the Chinese Sinopharm vaccine, with which they hope to launch their vaccination program later this month.

Another 800,000 vaccines are expected to arrive in the country later this year through the EU, but the country has also asked neighbors Albania, Bulgaria, Greece, and Serbia for assistance, along with Poland and Hungary.

North Macedonia, a former Yugoslav republic, has reported more than 96,000 confirmed infections and nearly 3,000 deaths, and currently has a daily infection rate of 15.6 per 100,000 population, as a weekly rolling average, which is lower than the EU average and about half the current infection rate in the United States. ___ Stojanovic reported from Belgrade, Serbia