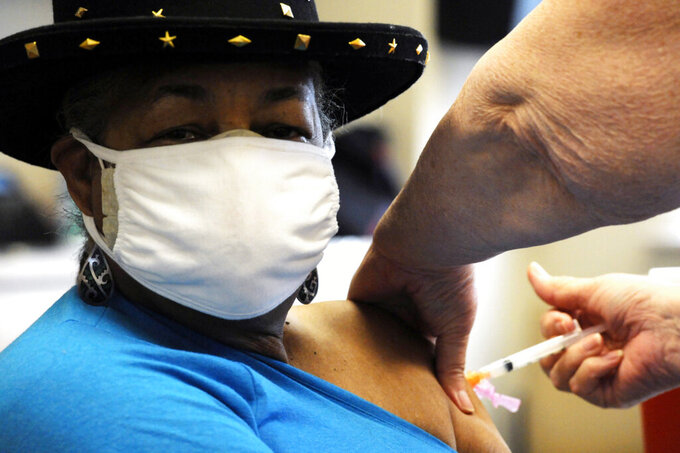 Georgette Moon receives a COVID-19 vaccine at the county health department in Tuskegee, Ala., Monday, Jan. 25, 2021. The clinic has yet to reach its maximum capacity for immunizing people in the mostly Black city, the site of the infamous "Tuskegee syphilis study," that ended in 1972. Moon, a former city council member, said she wanted to both protect herself and be a role model to encourage others to get the shot. (AP Photo/Jay Reeves)

TUSKEGEE, Ala. (AP) — Lucenia Dunn spent the early days of the coronavirus pandemic encouraging people to wear masks and keep a safe distance from each other in Tuskegee, a mostly Black city where the government once used unsuspecting African American men as guinea pigs in a study of a sexually transmitted disease.

Now, the onetime mayor of the town immortalized as the home of the infamous “Tuskegee syphilis study” is wary of getting inoculated against COVID-19. Among other things, she's suspicious of the government promoting a vaccine that was developed in record time when it can't seem to conduct adequate virus testing or consistently provide quality rural health care.

“I’m not doing this vaccine right now. That doesn’t mean I’m never going to do it. But I know enough to withhold getting it until we see all that is involved,” said Dunn, who is Black.

The coronavirus immunization campaign is off to a shaky start in Tuskegee and other parts of Macon County. Area leaders point to a resistance among residents spurred by a distrust of government promises and decades of failed health programs. Many people in this city of 8,500 have relatives who were subjected to unethical government experimentation during the syphilis study.

Health experts have stressed both the vaccines' safety and efficacy. They have noted that while the vaccines were developed with record-breaking speed, they were based on decades of prior research. Vaccines used in the U.S. have shown no signs of serious side effects in studies of tens of thousands of people. And with more than 26 million vaccinations administered in the U.S. alone so far, no red flags have been reported.

Tuskegee is not a complete outlier. A recent survey conducted by the communications firm Edelman revealed that as of November, only 59% of people in the U.S. were willing to get vaccinated within a year with just 33% happy to do so as soon as possible.

When Alabama and the rest of the South were still segregated by race, government medical workers starting in 1932 withheld treatment for unsuspecting men infected with syphilis in Tuskegee and surrounding Macon County so physicians could track the disease. The study, which involved about 600 men, ended in 1972 only after it was revealed by The Associated Press.

A lawsuit filed on behalf of the men by Black Tuskegee attorney Fred Gray resulted in a $9 million settlement, and then-President Bill Clinton formally apologized on behalf of the U.S. government in 1997. But the damage left a legacy of distrust that extends far beyond Tuskegee: A December survey showed 40% of Black people nationwide said they wouldn’t get the coronavirus vaccine. Such hesitancy is more entrenched than among white people, even though Black Americans have been hit disproportionately hard by the virus.

The Chicago-based Black nationalist group Nation of Islam is warning away members nationwide with an online presentation titled “Beyond Tuskegee: Why Black People Must Not Take The Experimental COVID-19 Vaccine.”

Gray, now 90 and still practicing law in Tuskegee, rejects such comparisons. The syphilis study and the COVID-19 vaccine are completely different, he said. He believes that enough that he himself has gotten the vaccine and is publicly encouraging others to do the same.

Georgette Moon is on a similar mission. Hoping to both protect herself and encourage skittish friends, the former city council member recently bared an arm and let a public health nurse immunize her. Now, Moon said, if only more fellow Black residents could overcome their lingering fears and get the vaccine.

“The study is a huge factor,” Moon said. “I’ve had very qualified, well-educated people tell me they are not going to take it right now.”

The Macon County health department, which is administering two-step Moderna vaccines in its modern building near downtown, could perform as many as 160 immunizations a day, officials said. But a maximum of 140 people received the vaccine on any single date during the first six days of appointments, with a total of 527 people immunized during the period. Health care workers, emergency responders and long-term care residents are currently eligible for shots in Alabama, along with people 75 and older.

There are some signs of hope. State statistics show a slow uptick in the number of people coming in for vaccinations, and word seems to be filtering through the community that it’s OK to be vaccinated.

Down the street from the county clinic, the Veterans Affairs hospital in Tuskegee is vaccinating veterans 65 and older. While only 40% of the VA workers in the area have been vaccinated, officials said, more people are agreeing to the shots than during the initial wave.

“They know people who have had the vaccine, they hear more about it, they become more comfortable with it,” said Dr. April Truett, an infectious disease physician at the hospital.

The Rev. John Curry Jr. said he and his wife took the shots after the health department said they could get appointments without a long wait. The pastor of the oldest Black church in town, Curry said he is encouraging congregants to get the vaccine.

Yet he said he also understands the power of lingering distrust in a town that will forever be linked to the syphilis study, one of the most reviled episodes of U.S. public health history.

“It’s a blemish on Tuskegee,” he said. "It hangs on the minds of people.”