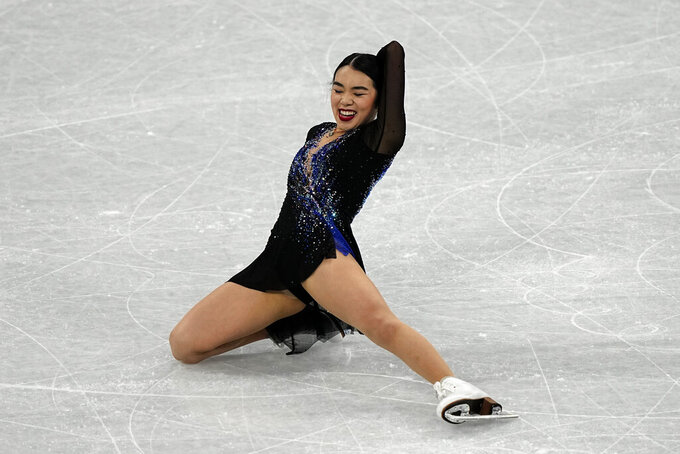 BEIJING (AP) — Kamila Valieva stood at the edge of the rink to get some last-second advice from her coach, Eteri Tutberidze, then took one deep breath and glided swiftly to the middle of the ice inside cavernous Capital Indoor Stadium.

And proceeded to leave everyone else breathless.

In a performance that confirmed her place as the gold medal-favorite at the Beijing Games, the 15-year-old Valieva laid down one of the highest-scoring short programs in history. Her score of 90.18 points on Sunday thrust the heavily favored Russian team into the lead after the second of three days of competition in the team event.

“I'm obviously happy that we're in the lead at the moment,” she said, “and I hope that continues in the free skate as well.”

It did through the men's free skate, where Mark Kondratiuk finished a surprising third behind Yuma Kagiyama of Japan. That left the Russians with 45 points, three ahead of the U.S. and six ahead of Japan, heading into the free dance, pairs and women's free skates that will decide the medals on Monday.

It was a disappointing day for the Americans, who had led after Day 1 thanks to winning performances from Nathan Chen and ice dancers Maddison Hubbell and Zachary Donohue. Karen Chen fell on her final jump in the women's short program, and Vincent Zhou — subbing into the event for Nathan Chen — struggled during his free skate.

That left the U.S. trailing the Russian team and forced to keep a wary eye on Japan in third place.

"The rest of our team is extremely strong and everyone here is prepared to say that they're part of getting the job done,” Zhou said, “so I believe in my teammates and I fully support them along the way.”

One of the dominant story lines of the figure skating program in Beijing is whether the powerful trio of Russian women, all led by the renowned Tutberidze, can become the first to sweep an Olympic podium.

And whether the incomparable Valieva, with her soaring jumps and unmatched artistry, will land on top.

She did nothing to dissuade anybody during her short program Sunday. Poised and confident beyond her years, Valieva opened with a clean triple axel and an effortless triple flip before a triple lutz-triple toe loop combination that pushed her score to 90.18 points, just off her world record of 90.45 set at last month's European championships.

To put that in perspective, Wakaba Higuchi of Japan was second in the team event with 74.73 points.

“I was a little nervy,” said Valieva, the fourth woman to land a triple axel in Olympic history, “but along with that I know that the team always supports me, so it happened with this kind of neutral attitude.”

Neutral? Imagine what she'll do if she puts it in drive.

Valieva's performance was so dynamic that the American team gave her a standing ovation.

The Americans made headlines on the opening day of competition when Nathan Chen combined with Hubbell and Donohue and the pairs team of Alexa Knierim and Brandon Frazier to build a surprising two-point lead over the Russian team.

In a bid to keep the momentum going, Team USA opted for the experience of Karen Chen, a member of the 2018 Olympic team, over newcomers Mariah Bell and Alysa Liu in the women's short program and Zhou for the men's free skate.

It didn't go exactly to plan.

Chen was shaky on her opening triple lutz-triple toe loop, then appeared to gather herself during the middle of her short program, set to music from the 2000 psychological drama “Requiem for a Dream.” And it looked as if she'd make it through the rest of the program cleanly before a fall on her final jump, a triple loop.

“Overall the practices have been feeling very solid,” Chen said, "but I will say this morning: My morning practice, I felt just, like, the idea of competing started to sink in. And I felt a little, just like, tense.”

Zhou also admitted feeling a little tense before his program. It didn't help that he was the last of the five men to take the ice, and that he had to follow Kagiyama's near-perfect program set to music from the movie “Gladiator.”

Zhou under-rotated his opening triple lutz, then was supposed to do a quad flip but only did a single. He also was shaky on a quad salchow and quad toe loop before rallying in the back half of his program to salvage third place.

“A little bit of nerves from waiting to skate last, but it wasn’t terrible,” Zhou said. "I think a good way to get into my knees before the individual event and hopefully Team USA can get a medal in the team event.”