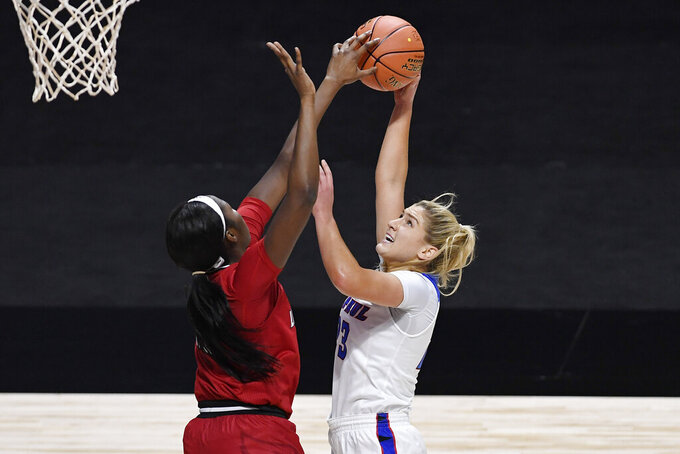 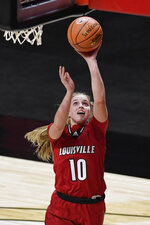 UNCASVILLE, Conn. (AP) — It was a record-setting performance for Jeff Walz's No. 5 Louisville Cardinals.

Hailey Van Lith and Kianna Smith each scored 21 points in the highest-scoring game in Louisville history, a 116-75 romp over No. 20 DePaul on Friday night in the Jimmy V Classic.

The Cardinals (3-0) surpassed the 115 points they scored against Murray State in 2017, reaching that point total with 3:53 left in the game that wasn't finalized until earlier this week.

“The pace of the game was something that we like. we like to get up and down the floor trying to play as fast as we can,” Walz said. “That's how DePaul plays. They have a style of play and they are going to press the entire game. We did a really nice job looking for our teammates and making easy opportunities and made shots.”

Louisville was supposed to play UConn at Mohegan Sun in this game, but the Huskies have been on pause because of a positive COVID-19 test. DePaul was originally going to open its Big East season Friday against Villanova. The Wildcats agreed to move that game so the Blue Demons could play the Cardinals.

“The victory on the whole night was being able to play the game,” Walz said. “Give a huge shoutout to Doug (Bruno), DePaul and his program when he saw this was possibly a game that was needed. Got to give the Big East a lot of credit to make this happen. They had to move some games. ... There was a lot of work that went in to play this game.”

Louisville led 30-24 after one quarter before opening the second period with a 25-6 run to blow it open. Van Lith, a freshman, had nine points during the game-changing spurt. The Cardinals led 61-37 at the half.

They extended the advantage to 101-50 after three quarters, crossing the century mark in the final seconds of the third.

They missed their first 14 attempts from behind the arc against Louisville before Dee Bekelja made one with 52 seconds left in the half.

Freshman Darrione Rogers scored 25 points to lead DePaul, which finished 4 or 27 from behind the arc. Despite their struggles from 3, one positive for the Blue Demons was that they took 37 free throws, making 25 of them.

“We hung for a quarter and that’s all,” DePaul coach Doug Bruno said. "We didn't defend, we didn’t rebound and had no offensive patience whatsoever. We were putting a square peg into a round hole all night and it turned into a disaster.

The former Big East foes foes have played 33 times, with DePaul holding a 17-16 edge. The last meeting before Friday came in the second round of the NCAA Tournament in 2016 — a win by the Blue Demons. ... DePaul had a few players kneeling during the national anthem while Louisville opted to be in the back off the court.

DePaul didn't wear masks while playing for the first time this season. Coach Doug Bruno said his team wore masks on the court at the advice of the school’s medical staff to help potentially lessen the chance of catching the coronavirus. His team has worn masks in every practice since Aug. 7. The Blue Demons did warm up in them.

While the Cardinals have played three games now, they've had four games canceled by the coronavirus. Louisville was supposed to play games against Middle Tennessee, Cincinnati and UConn. Those were all lost because of the virus. Walz has taken to Twitter to find games as well as forming a group text with about 25 coaches to try and schedule games at the last minute if the need arises.

Bruno and Walz donated $50 apiece for each 3-pointer made and each assist in the game. Couple that with the $50 that ESPN announcers Rebecca Lobo and Ryan Ruocco pledged to the V Foundation for every 3 and $5,100 was raised from the game. The women’s classic debuted in 2002.