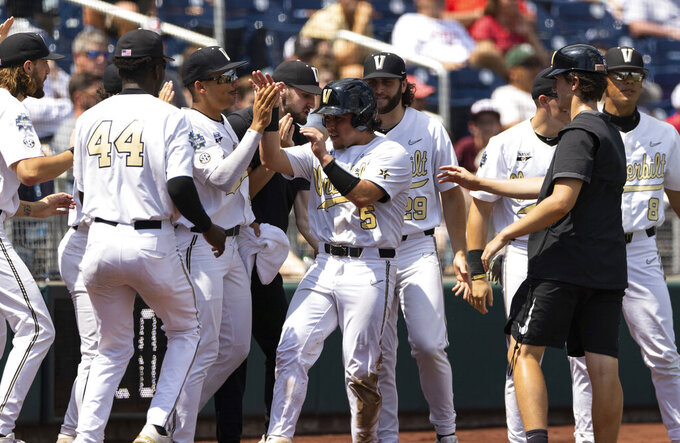 Vanderbilt's CJ Rodriguez (5) celebrates with teammates after scoring off a wild pitch from North Carolina State in the fourth inning during a baseball game in the College World Series, Friday, June 25, 2021, at TD Ameritrade Park in Omaha, Neb. (AP Photo/Rebecca S. Gratz)

“Let me know what you want to do,” Avent said he told them. “Took about probably six seconds. That’s who they are. We found a way to make it work.”

Kumar Rocker struck out 11 in six innings and Vanderbilt beat North Carolina State 3-1 in what ultimately turned out to be the Wolfpack's final game of the season.

The NCAA announced early Saturday that NC State would not continue in the CWS because of COVID-19 protocols and that Vanderbilt would automatically advance to the best-of-three finals starting Monday.

The Wolfpack were more competitive than would have been expected under the circumstances against the No. 4 national seed and reigning national champion Commodores (48-16).

The Friday game was delayed an hour after the NCAA said it needed time to complete “health and safety protocols.” NC State (37-19) said in a statement that “several players” had entered the COVID-19 protocol.

Only 13 of the 27 players on the travel roster, including four pitchers, were cleared to play. All but one of the 13 got in the game.

NC State coach Elliott Avent said he found out there was a problem 45 minutes to an hour before the scheduled start time. He said players would be getting re-tested and, if the results were negative, some or all could play Saturday.

Facing Rocker (14-3) isn't easy for any team, especially one with a patchwork lineup and whose four batters at the bottom of the order had combined for 27 at-bats.

“You pitch to them like any other player,” Rocker said.

Rocker is a projected top-10 pick in the Major League Baseball draft next month and was the CWS Most Outstanding Player in 2019. There was no CWS last year because of the pandemic.

Matched against Rocker was freshman Garrett Payne (0-1), who had thrown a total of 8 1/3 innings in six relief appearances and found out a half-hour before first pitch he would fill in for scheduled starter Matt Willadsen.

“It’s almost going back to playing sandlot,” Vandy coach Tim Corbin said. “We didn’t know who was going to pitch until five minutes before the game. So there’s really nothing you can do about it. You knew he was right-handed. You knew that once we got the information, we started to give the information to the kids real quick.”

Vanderbilt's offense has been slow to get going in Omaha, and the Commodores could never get comfortable against their outmanned opponent.

“It shows how tough we are,” Sam Highfill said. “We went out and played a heck of a game. It didn’t go the way we wanted it to, but we’re ready to go out and do it again tomorrow.”

NC State had eight hits to Vandy's six, and the bottom of the order went 4 for 14. Highfill, the starting pitcher in a 1-0 win over Vandy on Monday, was error-free as the fill-in first baseman and went 3 for 4.

Down two runs, NC State had the bases loaded in the seventh with their leading home run hitter, Luca Tresh, at bat with two outs. He popped out. They left two runners on base three other innings and stranded a total of 12.

The Commodores were hitless against Payne until they scored twice in the fourth. CJ Rodriguez singled in Dominic Keegan and he came home on a bases-loaded wild pitch.

Payne left to applause from fans and the handful of players and staff in his dugout after he issued a walk to start the sixth. He limited Vandy to two hits in an 87-pitch outing that was his longest of the season. The Wolfpack's run came in the fifth on three singles and a sacrifice fly.

Rocker struck out the first six batters — the first pitcher to do that at the CWS since Virginia’s Danny Hultzen in 2011 — before Highfill came to bat.

Highfill hadn’t batted in a college game since March 4, 2020, but was a .360 hitter in high school. He got the Wolfpack's first hit, swatting a liner down the right-field line leading off the third, and singled again in the fifth and seventh.