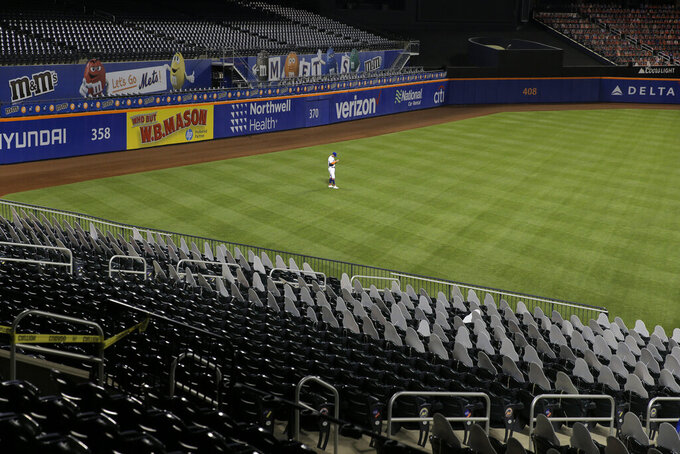 NEW YORK (AP) — Christian Vázquez is giving the Boston Red Sox everything they could ever hope for behind the plate.

Meanwhile, the New York Mets are still waiting for Edwin Díaz to figure it out in the Big Apple.

Pérez (1-1) overcame four walks and some shaky defense behind him, allowing only two hits while striking out five in 5 2/3 innings for his first win with Boston. The left-hander signed a $6.5 million, one-year contract as a free agent in December.

“Great job from Martín to get us that far and really commanded his pitches well from the first inning on,” Red Sox manager Ron Roenicke said. “That’s huge for us to have him do that.”

Vázquez had three RBIs for the second consecutive night. He connected twice off Steven Matz (0-1), including a two-run shot on an 0-2 pitch in the fourth that followed Xander Bogaerts' soft infield single.

The drive put Boston ahead 3-2 and left Matz shaking his head.

“I put the pitch where I wanted it,” he said. “I got 0-2 on him really fast and then he got me. So I was definitely frustrated right there.”

Boston loaded the bases with nobody out in the ninth and added an insurance run when an erratic Díaz hit José Peraza with a pitch. Díaz also walked two batters in a 35-pitch outing, his latest meltdown since the All-Star reliever was acquired from Seattle in a splashy trade before last season.

The right-hander had such a horrendous first year with the Mets that he lost his job as closer. He earned a save in his first 2020 appearance but then blew a chance last weekend when he served up a tying homer against Atlanta.

“We need to talk. We need to work, and that's something that we're going to do," Rojas said. “He's got to control his emotions. That's (one) of the things that we're definitely going to talk about.”

Heath Hembree worked out of trouble in the seventh for Boston, and Matt Barnes did the same in the eighth. Brandon Workman, on the mound for the third straight day after throwing 30 pitches Wednesday, got three outs for his second save — both in the last two nights.

Workman whiffed slugger Pete Alonso with a runner on second to end a game that took 3 hours, 49 minutes.

Michael Conforto and the Mets stranded nine, falling to 4 for 24 with runners in scoring position over their last two games.

“We're just getting a little anxious in those situations,” Rojas said.

The Red Sox have won two in a row following a four-game skid. They split four consecutive games against the Mets, with the road team winning each one.

Vázquez hit a leadoff shot to left field in the second and threw out a runner trying to steal. His only other multi-homer game in the majors came last September at Philadelphia. He joined Hall of Famer Carlton Fisk (1973) as the lone Red Sox catchers to hit four home runs in the first seven games of a season.

“Doing both things. Called a nice game, blocked well, made the throw from his knees to throw out the baserunner, and obviously the offense,” Roenicke said. “We’ll keep him out there. As long as he’s catching like this and strong, we’ll keep putting him out there.”

Vázquez also launched a tying homer in the seventh inning Wednesday night and a two-run single in the eighth that helped Boston rally for a 6-5 victory.

Jeff McNeil laced a two-run single off Pérez in the third to give the Mets a 2-1 lead.

Red Sox: LHP Eduardo Rodríguez still isn't close to being able to return from a heart condition he developed as a symptom of COVID-19. Roenicke said Rodriguez hasn’t been cleared to start pitching again, and when he does it will take him time to get back into game shape. ... 3B Rafael Devers and 1B Mitch Moreland were rested against the left-hander. Devers pinch-hit in the ninth and struck out with the bases loaded against Díaz, then made a tough play at third for the first out of the bottom half.

Mets: RHP Marcus Stroman (torn calf muscle) is scheduled to face hitters Friday. ... INF Jed Lowrie got a second opinion on his troublesome left knee. He has looseness in a ligament, general manager Brodie Van Wagenen said. Lowrie has hardly been able to play for New York since signing a $20 million, two-year contract before last season.

Red Sox: After winning two games at Citi Field in Queens, the Red Sox remain in New York City but head up to the Bronx for the opener of a three-game series Friday night at Yankee Stadium. It will be the first meeting between the longtime rivals during this tenuous season shortened by the coronavirus. Ryan Weber (0-1) pitches for Boston against left-hander Jordan Montgomery.

Mets: RHP Rick Porcello seeks his 150th career win and tries to rebound from an ugly Mets debut when New York begins a four-game series in Atlanta. Porcello was tagged for seven runs, six earned, and seven hits with three walks in two-plus innings Sunday during a 14-1 loss to the Braves. He is 2-0 with a 0.79 ERA in two career starts at Atlanta. LHP Sean Newcomb goes for the Braves.