Venezuela gives US oilmen house arrest in gesture to Biden 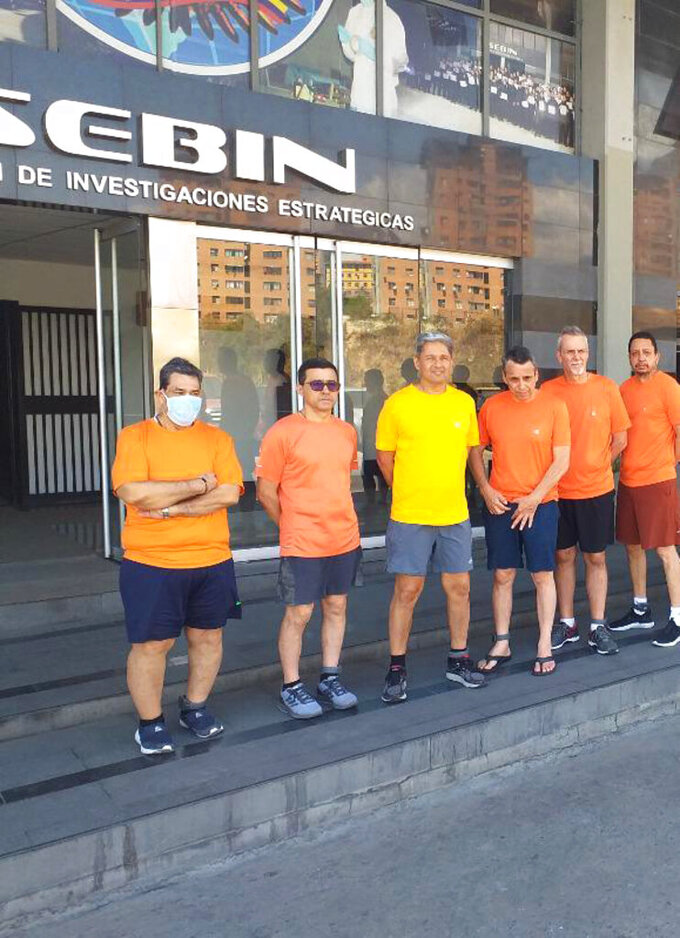 MIAMI (AP) — Six American oil executives jailed in Venezuela more than three years ago on corruption charges were granted house arrest on Friday in a gesture of goodwill toward the Biden administration as it reviews its policy toward the politically turbulent South American country.

The partial release of the six employees of Houston-based Citgo was confirmed to The Associated Press by family members of the men.

Tomeu Vadell, Jose Luis Zambrano, Alirio Zambrano, Jorge Toledo, Gustavo Cardenas and Jose Pereira were hauled away by masked security agents while at a meeting in Caracas just before Thanksgiving in 2017. They had been lured to Venezuela in order to attend a meeting at the headquarters of Citgo’s parent, state-run oil giant PDVSA.

The so-called Citgo 6 were granted house arrest once before — in December 2019 — only to be re-jailed two months later on the same day that President Donald Trump welcomed opposition leader Juan Guaidó to the White House.

In releasing the men, Maduro could be betting he’ll receive a better hearing from President Joe Biden, who on the campaign trail called Trump’s policy of regime change an “abject failure” that has served only to strengthen the socialist leader.

Earlier this week, senior Biden officials from several federal agencies were scheduled to meet to weigh U.S. options, including whether to ease up on crippling oil sanctions it inherited and take steps to support an uncertain attempt at dialogue between Maduro and his opponents, according to two people familiar with the plans.

The meeting, which was to be attended by Deputy Secretary of State Wendy Sherman, followed a series of moves by Maduro in recent days to grab Biden’s attention including yielding to longstanding U.S. demands that the World Food Program be allowed to operate in the country at a time of growing hunger.

In recent days Maduro’s allies have also quietly discussed with opponents the makeup of a new electoral council, joint efforts to combat the coronavirus and met with diplomats from Norway trying to revive negotiations to end the country's never-ending political crisis.

However, the continued imprisonment of Americans was seen as a formidable obstacle to any outreach.

Juan Gonzalez, the National Security Council’s senior director for the Western Hemisphere, told the AP in an interview Friday that to gauge Maduro's seriousness about any eventual negotiations he wanted to see “concrete steps by the regime, not words."

In recent weeks, former New Mexico Gov. Bill Richardson was among those working behind the scenes to press Maduro’s government to release the men, all but one of them dual Venezuelan-U.S. nationals.

“This is a positive and important step that should help secure their wellbeing during the COVID-19 outbreak in Venezuela,” said Richardson in a statement.

Richardson, who has opened back channels to hostile governments in Iran, Cuba and North Korea to win the release of some 40 Americans, vowed to work tirelessly to bring the men back home.

He also called for the release of Luke Denman and Airan Berry — two former Green Berets who participated in a failed raid last year staged from neighboring Colombia — and former U.S. Marine Matthew Heath, who is being held on unrelated allegations.

The six men were convicted of embezzlement last year in a trial marred by delays and irregularities. They were sentenced to between 8 and 13 years of prison for a never-executed proposal to refinance some $4 billion in Citgo bonds by offering a 50% stake in the company as collateral. Maduro at the time accused them of “treason.” They all pleaded innocence.

Also pushing for the men's release was Pope Francis. Cardinal Pietro Parolin, the Vatican's Secretary of State, sent a letter sent last fall to then U.S. Ambassador to the Vatican Callista Gingrich mentioning a letter by the Holy See's representative in Caracas to Venezuelan authorities urging clemency.

Parolin was scheduled to travel to Venezuela, where he previously serves as the Vatican's ambassador, to attend Friday's beatification of Jose Gregorio Hernandez, a 19th century Venezuelan MD dubbed “the doctor of the poor.” But the Vatican No. 2 cancelled the trip at the last minute, citing the coronavirus pandemic.

“We wish our loved one Tomeu were on a plane to the USA with unconditional freedom but are very grateful for this positive step made possible by Gov. Richardson & his team, Secretary of State Antony Blinken & the State Department, the Vatican, and other allies around the world,” the family of Tomeu Vadell said in a statement.

AP Writer Gisela Salomon in Miami contributed to this report.