Venezuelan does funerals alone in Peru cemetery amid virus 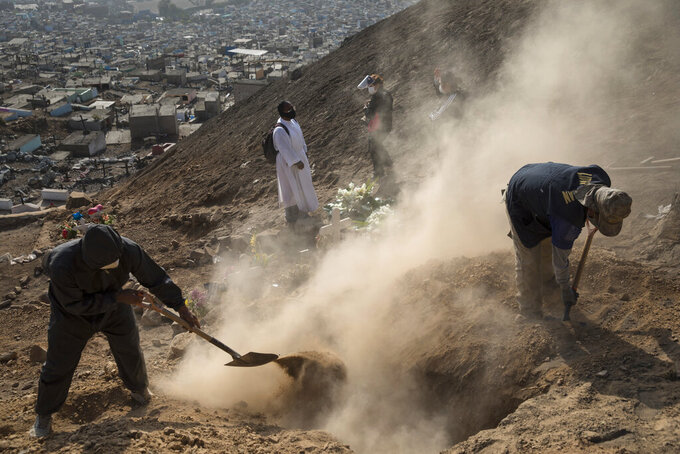 Brother Ronald Marin, a 30-year-old layworker from Venezuela, talks with mourners Ines Rodriguez and Elisa Sabogal, as the remains of their 62-year-old uncle Arturo Sotelo, who died from the new coronavirus, are buried at the "Martires 19 de Julio" cemetery in Comas, on the outskirts of Lima, Peru, Saturday, July 18, 2020. "What we do is try to make people find hope," said the man who until 2018 was a school teacher and ultimately took the vows of chastity, poverty and obedience. (AP Photo/Rodrigo Abd)

LIMA, Peru (AP) — Wearing a white robe and shoes worn down by dust, Venezuelan layworker Ronald Marín is the only one who administers funerals in a cemetery far from the capital’s center.

At a time when Peruvian authorities calculate that more than a quarter of Lima's population may have been infected with the new coronavirus, Marín is one of the few Catholic Church representatives who remain in cemeteries alongside the mourners.

“What we do is try to make people find hope,” said the man who until 2018 was a school teacher, managed the dining room of a parish in the Venezuelan city of Guacara, and visited the sick. He ultimately took vows of chastity, poverty and obedience.

Catholic churches in Peru closed their temples to avoid contagions while virtual Masses on the internet has multiplied, but a handful of the devout, including Marín, believe that their duty is to pray with the sick, provide support in cemeteries and pray with family members of the victims.

Brother Marín carries a rucksack with a worn-leaf book with the title Funeral Ritual, a silver cross, and a copper sprinkler with which he splashes holy water at the end of the last prayer for the deceased in a cemetery that looks like a miniature city wedged between two desert hills.

In his reflections, shortly before the coffins wrapped in transparent plastic are buried, the layworker quotes Job and the calamities he experienced, Ezekiel walking through a valley of dry bones and Tobias listening to his father’s advice on how to bury him.

Marín, 30 years old and with an education degree from the University of Carabobo, arrives before noon and leaves at night when the cemetery of the Comas district of Lima, with more than half a century of existence and no electric light on the grounds, empties of the living and only the dead remain.

When he is not tending to the deceased, he visits the surrounding neighborhoods where since 2018 he has taught catechism to almost a hundred sons and daughters of bricklayers, florists and candy vendors so that they can receive baptism and first communion in a nearby church.

He left Venezuela after protesting for more than a decade against the socialist government and when in 2018 he became infected with tuberculosis, a doctor recommended that he migrate in order to feed himself better.

His worn-out cell phone, with the screen cracked into dozens of fragments, rings in the early morning with calls, audios and text messages from people who ask him if he will be in the cemetery the next day to pray for someone who has just died.

Sometimes they invite him to pray at the homes of the deceased after the first month of death.

The presence of the laity in areas where the church never came summons neighbors who dressed in facemasks come to pray.

Marín asks for a chair and reflects on the teachings of the Bible. He uses simple words like when he was a teacher in Venezuela, a profession he practiced until traveling to Peru in search of work like 830,000 other migrants.

In Lima he sold hot coffee on the streets and slept in a car depot. Shortly after, he met the parish priest of a church where he was assigned a janitor job for a month before being sent to the cemetery to comfort the mourners.

Peru has the highest death rate per million in the Americas, above Chile, the United States, Brazil and Mexico.