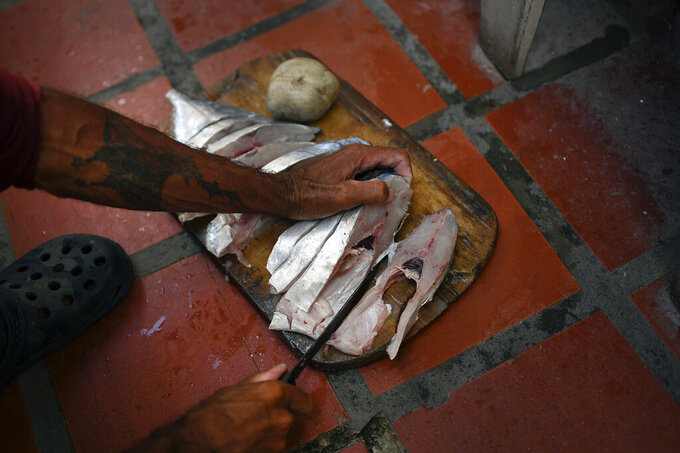 Eric Mendez, a 40-year-old bricklayer, prepares a caught fish to cook at his home after returning from a day of open sea fishing on his inner tube, at Playa Escondida in La Guaira, Venezuela, Friday, Aug. 14, 2020, amid the new coronavirus pandemic. Fishermen like Mendez face strong currents, sharks and the fear a fishhook could puncture their inner tube far from shore. But a day's catch could feed their families for a week. (AP Photo/Matias Delacroix)

LA GUAIRA, Venezuela (AP) — The biggest fear is a fishhook puncturing the inner tube that keeps them afloat far from shore. Then come sharks grabbing their catch and maybe biting their legs. And the current that threatens to pull them out to sea.

A small but growing number of people in the coastal town of La Guaira, just a few minutes from the capital of Caracas, have turned to the sea for sustenance since the COVID-19 pandemic has shut down the Caribbean nation’s already miserable economy.

"If we had steady work, we wouldn't risk our lives out there," said Juan Carlos Almeida, who is accompanied by his fishing partner Eric Méndez. “We're bricklayers, but there's no construction.”

Others who paddle out in small groups up to 5 miles (8 kilometers) from shore lost jobs in restaurants or shops catering to beachgoers.

All the beaches are closed, but the workers still have hungry children at home in their hillside barrios.

“If we don’t help ourselves and don’t go to work, who’s going to feed us?” said the 35-year-old Almeida. “Nobody.”

The new coronavirus hit Venezuela in mid-March and the government ordered most businesses closed. The virus has steadily spread in the five months since. Officials say it's killed fewer than 300 and sickened roughly 31,000.

The nation remains largely paralyzed and commercial flights have been grounded at the the nation's main airport in La Guaira. People have little hope life will return to normal anytime soon.

Almeida and Méndez, 40, consider themselves experienced after spending a couple months entering the water on inner tubes. They make plastic hand paddles and wear flippers on their feet to propel them into the Caribbean. They're quickly out of sight of those back on shore.

They wear their extra fishhooks in the brim of their hats — away from the rubber and ready to grab. They drop fishing lines from a spool baited with sardines.

When they catch a fish, they pull it in slowly to see whether a shark is following. They avoid drawing them in too close.

Despite the risks, the fishermen say being at sea for several hours brings a calm. They're far from the struggles of life on land — the growing coronavirus, economic crisis, hungry children and no work.

It's also where the big fish swim.

They paddle back to shore against the currents. It’s tiring. Then they walk several miles home, barefoot and carrying their catch in a yellow, blue and red backpack the government gives schoolchildren. Their inner tube rests on one shoulder.

This was a good day, and they pulled in enough fish to feed their families and share some with neighbors for a week. The rest they sell for a few dollars.

“If we can’t work, where do we go?” said Méndez, a husband and father with two children. “God gave us this — the sea. So we go fishing.”