Venezuela's beloved 'doctor of the poor' to be beatified 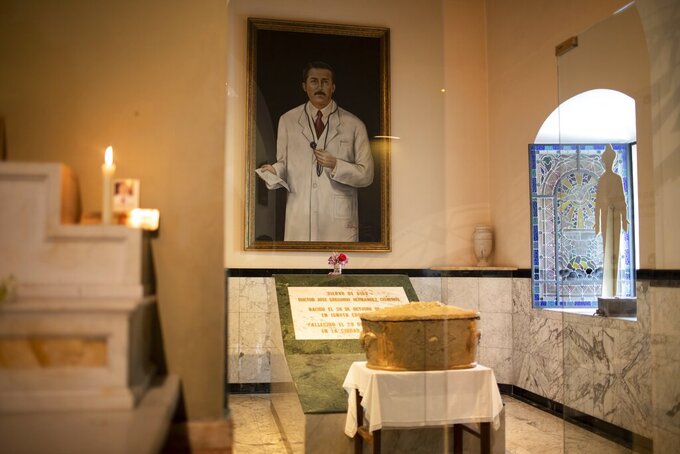 The remains of Venezuelan Dr. Jose Gregorio Hernandez popularly known as the "doctor of the poor", sit in an urn backdropped by his portrait, inside the Nuestra Senora de la Candelaria Catholic church, in Caracas, Venezuela, Friday, April 23, 2021. Hernandez is set to be beatified by the Catholic church, a step towards sainthood, on April 30th in the Venezuelan capital. (AP Photo/Ariana Cubillos) 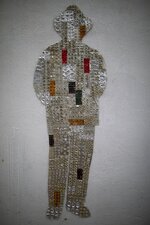 CARACAS, Venezuela (AP) — With the austerity of a monk, a vocation to seek the good of others and a bright scientific mind, Jose Gregorio Hernández won the affection of those who called him “the doctor of the poor.” He became a religious icon after his death in 1919, and since then millions of Venezuelans have fervently asked that he be universally reverenced.

Now, the doctor, scientist, university professor and pioneer of bacteriology will be beatified, a step toward sainthood in the Roman Catholic Church. The beatification ceremony Friday will culminate 72 years of efforts by Venezuela's Catholics.

Initial plans called for a ceremony at a stadium, but the coronavirus pandemic has forced organizers to change venues, limit attendance to fewer than 300 people — mostly priests and nuns — and leave most Venezuelans to watch the event on television. The pared-down event will take place in a small chapel at a Catholic school on the edge of a mountainous national park north of Caracas.

The Vatican secretary of state, Cardinal Pietro Parolin, had been scheduled to lead Hernández’s beatification in person. But the former ambassador of the Holy See in Venezuela canceled his trip to the South American nation on Wednesday, citing the pandemic.

Hernández died at age 54 when he was hit by one of the few cars in Venezuela in the early 20th century. His ascent toward sainthood has been plagued with obstacles, but in the hearts of many Venezuelans, he already is a saint.

The beatification “does not change things at all ... for me he has always been a saint,” said Odalis Josefina Vargas, who like millions of other Venezuelans venerates the doctor famed for giving free treatment and medicines to the poor.

Vargas has an image of the doctor on an altar in her home that is always illuminated with green lightbulbs, except during the blackouts that plague the country.

When Pope John Paul II visited Venezuela in February 1996, he received a petition signed by 5 million people — almost one in four Venezuelans — asking that he declare Hernández a saint and make his veneration official.

On June 29, 1919, he was killed while crossing a street shortly after picking up some medicines at a pharmacy to take to a very poor old woman. An estimated 20,000 people participated in his funeral procession, about a quarter of the population of Caracas at the time.

The case that prompted beatification was that of Yaxury Solorzano, a girl who was seriously injured after being shot in the head and managed to recover completely in a miracle attributed to Hernández, the Archdiocese of Caracas reported then.

Pope Francis signed the decree for the beatification last June. In a video message Thursday, he noted that the beatification will take place at a challenging time for Venezuelans, saying, “I am aware that these prolonged hardships and anguish have been aggravated by the terrible pandemic of COVID-19 that affects us all.”

John Paul II, now a saint himself, visited Venezuela twice. But relations between Venezuelan Catholic leaders and the country’s socialist governments have been strained, particularly during the term of the late President Hugo Chávez. During his 1999-2013 government, he accused Catholic leaders of turning their backs on the poor and siding with the “oligarchy.”

Under Francis’ tenure as pope, relations have improved dramatically. Some observers had said Parolin’s planned trip to Venezuela could help the Vatican lay the groundwork for new negotiations between the government and opposition after a series of failed dialogues over the last five years.

“The beatification of Dr. Hernández is a special blessing from God for Venezuela, and invites us to work toward greater solidarity with one another, to produce among all the response of the common good so needed for the country to revive, to be reborn after the pandemic, with a spirit of reconciliation,” Francis said in his video message.

The beatification comes at a time when many Venezuelans struggle to feed their families as a result, among other factors, of soaring food prices amid hyperinflation. A total of 9.3 million people — about a third of the population — suffer from moderate or severe food insecurity, according to a 2020 report from the United Nations World Food Program.

The worship of Hernández has spread to other South American nations, as well as Spain and Portugal.

“It is something impressive. With the exodus of Venezuelans and the return to their places of origin of people who lived in our country, their knowledge and devotion has spread,” said Cardinal Baltazar Porra.