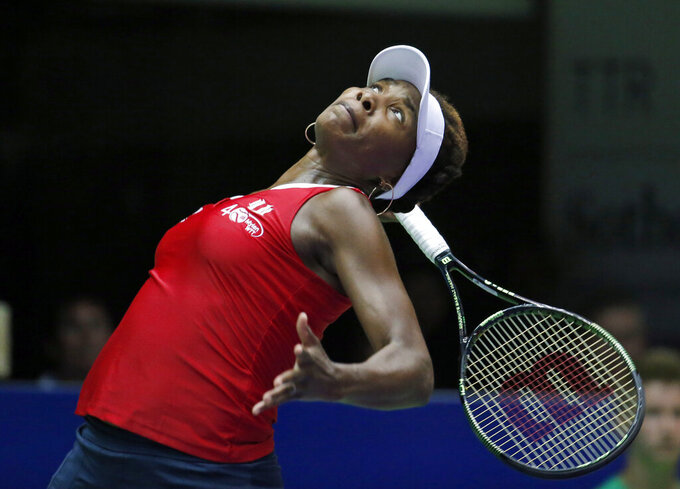 FILE - In this July 14, 2015, file photo, Washington Kastles' Venus Williams serves to Austin Aces' Nicole Gibbs during a tennis match in Washington. World TeamTennis says Venus Williams has committed to play in its three-week season that starts July 12, 2020. Williams will be a member of the Washington Kastles. That is one of nine teams that will gather at a resort in West Virginia. (AP Photo/Alex Brandon, File)

Venus Williams has signed up to play World TeamTennis for the 15th time, the league announced Thursday.

She will be a member of the Washington Kastles, one of nine teams that will gather at a resort in West Virginia for a three-week season starting July 12. Matches normally are played at various sites around the country, but WTT decided to bring everyone to one location because of the coronavirus pandemic.

Williams, who turned 40 last week, announced in 2011 that she had been diagnosed with Sjogren’s syndrome, a condition that can cause exhaustion and joint pain. Williams has since spoken about how she turned to a plant-based diet and learned other ways to get by.

The American is a seven-time Grand Slam singles champion, with five titles at Wimbledon and two at the U.S. Open. She also has paired up with her younger sister Serena to win 14 Grand Slam trophies in doubles.

Up to 500 spectators will be allowed to attend each match at a 2,500-seat outdoor court at The Greenbrier. A maximum of 250 people — 200 fans and 50 staffers — can be at any matches that will be moved to an indoor court if it rains.

All fans will be required to wear face masks and pass a temperature check.

Other players who have committed to participating include 2020 Australian Open champion Sofia Kenin, 2017 U.S. Open champion Sloane Stephens and twins Mike and Bob Bryan, who have won 16 Grand Slam doubles titles together.

WTT is increasing total prize money to $5 million this year, $1.5 million more than for its 2019 season.

All tennis events sanctioned by the ATP, WTA and International Tennis Federation have been suspended since March because of the COVID-19 pandemic and are on hold until a planned return in August.

But WTT is not affiliated with those tours — no ATP or WTA ranking points are awarded for matches — and does not need to abide by their decisions about when it is OK to compete.