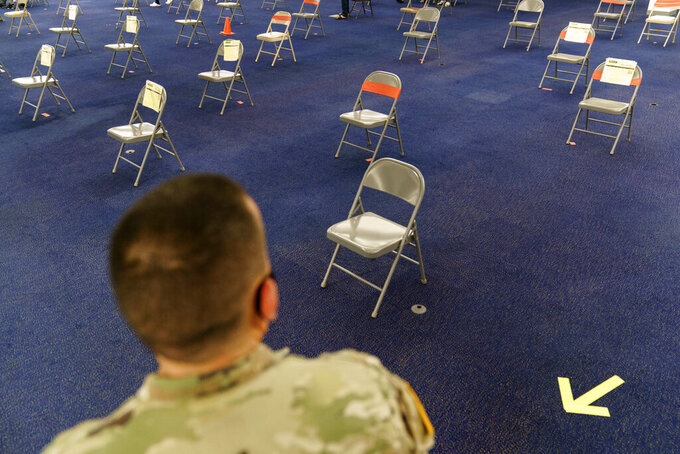 Rhode Island Army National Guard Sgt. Juan Gomez looks over the post inoculation waiting area at a coronavirus mass-vaccination site at the former Citizens Bank headquarters in Cranston, R.I., Thursday, June 10, 2021. The U.S. is confronted with an ever-growing surplus of COVID-19 vaccines, looming expiration dates and stubbornly lagging demand at a time when the developing world is clamoring for doses to stem a rise in infections. (AP Photo/David Goldman)

BURLINGTON, Vt. (AP) — A look at pandemic-related news around New England on Saturday:

Burlington expects thousands of people to gather along the Lake Champlain waterfront for the fireworks display on July 3, which was cancelled last year amid the coronavirus pandemic.

The events start with a ceremony at waterfront park at 5 p.m. honoring local COVID-19 victims and celebrating the community's resilience, WCAX-TV reports.

The fireworks start at 9:30 p.m. More details are expected next week.

The Dartmouth College Class of 2021 will be honored Sunday, with two guests allowed per graduate at the outdoor ceremony.

The college originally planned to prohibit guests because of the coronavirus pandemic but later decided to allow two tickets for each student receiving an undergraduate degree.

Those receiving graduate and professional degrees will be allowed two guests at events hosted by their individual schools, but not at the larger ceremony. Masks will be required for all attendees.

The ceremony will be held in Memorial Stadium instead of the college green to allow for social distancing.

Massachusetts schools had 103 coronavirus cases in students and staff in the last week, according to the state Department of Elementary and Secondary Education. That's a decrease from 130 the week before and 1,279 cases two months ago, WBZ-TV reported.

Between June 3 and June 9, districts, collaboratives and special education schools reported 85 cases in students and 18 in staff.

About 735,000 students are now in classrooms in Massachusetts public schools and 140,000 staff are working in-person, according to state estimates.

The weekly report released Thursday shows cases for students who are in hybrid or in-person models and not for those in remote-only programs.

A Maine-based chain of music and video stores is reopening a store in New Hampshire after abruptly closing it three weeks ago and laying off employees.

Bull Moose has not said exactly why it closed the Salem, New Hampshire store, but some laid-off employees said it was related to the company's decision to allow unmasked customers in the store, the Portland Press Herald reported. Employees said most of Salem staff opposed the decision. Some workers also said there were other employee issues.

Communication between upper management and Salem workers broke down this spring over a number of issues and the controversy over the mask rule was a symptom, said Bull Moose founder Brett Wickard. Company officials should have been more sensitive to how issues such as mask-wearing should be dealt with locally rather than issuing one rule across the chain’s 11 stores in Maine and New Hampshire, he said.

The company realized it made the wrong move and “started aggressively listening to everyone,” including reaching out to terminated workers, Wickard said. The 23 employees have accepted offers to be rehired, he said. Wickard also apologized on Twitter on Friday.

The company prides itself on building community and acting with empathy, “yet we failed on both those counts," he said.