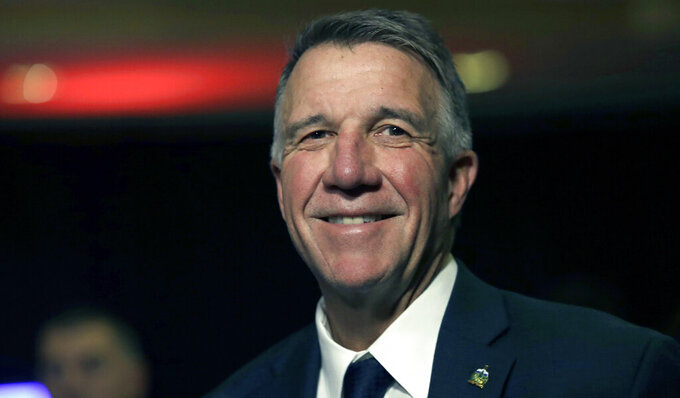 FILE- In this Nov. 6, 2018 file photo, Republican Vermont Gov. Phil Scott smiles during an election night rally party in Burlington, Vt. Scott announced, Thursday, May 28, 2020, that he is running for re-election, but won't hire staff, actively campaign or raise money until the current state of emergency because of the coronavirus is lifted. (AP Photo/Charles Krupa)

Vermont Republican Gov. Phil Scott announced Thursday he is running for reelection, but he won't hire staff, actively campaign or raise money until the current state of emergency imposed because of the coronavirus is lifted.

In an email to supporters, Scott said that during the pandemic, Vermont needs a governor who is focused full-time on responding to the disease and its economic consequences.

“I will not be campaigning in the traditional way while we are in the midst of our response to this pandemic,” Scott's announcement letter said. “Facing, fighting and defeating this virus — and rebuilding a stronger, more resilient economy — are my top priorities.”

Vermont and New Hampshire are the only two states in the country where governors serve two-year terms.

Thursday is the filing deadline to appear on the August primary election ballot.

Scott, 62, of Berlin, ran a construction company until he was elected governor. He is an accomplished stock car racer and he served as lieutenant governor from 2011 until 2017.

Scott won the 2016 election with 52% of the vote. In 2018, he won 55% of the vote, easily beating former utility executive Christine Hallquist.

He has focused his time as governor on, as he describes it, making Vermont more affordable for the people who live here while protecting the most vulnerable.

He has clashed with the Democratic-controlled Legislature on more than one occasion. Since he took office he has vetoed 18 bills. One, mandating a minimum wage increase, was overridden earlier this year by lawmakers.

In 2018, Scott angered many Republicans by supporting a package of gun control bills, including raising the age to buy firearms and banning high-capacity magazines, the first significant restrictions on gun ownership in the state's history.

During the pandemic Scott has focused on protecting Vermonters and the state has one of the lowest rates of growth for the virus of any state in the country. He has led a gradual reopening of the state's economy.

It's unclear how Scott's political philosophy will square with Democratic priorities while his administration and the Legislature work to chart a course out of the economic abyss caused by COVID-19.

Scott faces at least one Republican opponent in the primary. So far, three Democrats have filed to seek their party's gubernatorial nomination. Candidates have until the close of business Thursday to file the documents needed to run.

In his letter announcing he would seek his party's nomination, Scott said the least favorite part of his public life has been what he calls “the politics.” He said he has tried to focus his public life on helping others.

He said there is too much to do to protect the public health and restarting the state's economy. The current state of emergency is set to expire in mid-June, but depending on the circumstances it could be extended again.

Scott said he realizes the risks of not campaigning.

“But, I simply cannot bring myself to campaign during the state of emergency, even if it puts me at a political disadvantage in August and November,” he said.