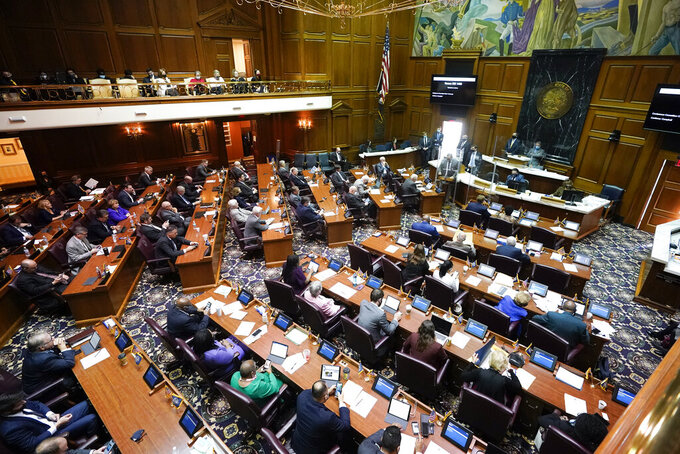 The House of Representative meet in the chamber at the Statehouse, Thursday, April 22, 2021, in Indianapolis. (AP Photo/Darron Cummings)

INDIANAPOLIS (AP) — Indiana legislators will return to the Statehouse next week for a possible vote to again override the governor’s veto of a bill limiting the broad authority used to impose restrictions around the state during the COVID-19 pandemic.

Senate and House leaders announced Wednesday that the one-day meeting will be held Monday. The announcements said that lawmakers could take up the bill vetoed Tuesday by Republican Gov. Eric Holcomb that would give local elected officials the power to block county or city public health orders issued during emergencies.

Holcomb said in his veto message that he didn't want to jeopardize the flexibility of local health officials as the state recovers from the coronavirus outbreak and work continues to vaccinate more people.

The bill would require any local public health orders more stringent than oned issued by the governor to go before elected county commissioners or city councils for approval. Holcomb’s coronavirus-related executive orders over the past year have allowed local officials to establish tougher regulations — an authority he frequently cited in defending his decisions lifting various statewide travel, crowd size and business restrictions.

Republican state Sen. Chris Garten of Charlestown, the bill’s sponsor, said in a statement Wednesday that the measure would ensure local elected officials have a say in restrictions imposed on their communities.

“When unelected officials are empowered to such a level as to limit religious liberty, shutter houses of worship, choose which businesses may operate and which must close, and impose fines on Hoosiers for living as free men and women, there must be a structural check and balance in place,” Garten said.

The state Senate voted 37-12 and House members voted 65-29 in favor of the bill two weeks ago, just before wrapping up this year's regular legislative session. Indiana legislators can override Holcomb’s veto by a simple majority vote in each chamber, which would put the measure into effect immediately.

Legislative Republicans voted last month to override Holcomb’s veto of another bill giving themselves more authority to intervene during statewide emergencies declared by the governor. Holcomb has filed a lawsuit against the Legislature, arguing that new law violates the state constitution.

The Indiana State Medical Association, the state’s largest physicians group, said it supported Holcomb’s veto of the county health orders bill because of what it called “potentially harmful proposals” included in the measure. The group said the veto “presents a prudent opportunity to await the completion of a comprehensive review of our local health departments and state delivery of public health services.”

Some other medical and health organizations also opposed the bill, arguing against shifting authority away from public health professionals to local elected officials who largely don’t have such experience. Supporters say it only applies to local actions issued under an emergency and not to orders issued against an individual business or resident over matters such as health code violations.

The bill would also give local elected officials hiring authority over local health officers and create a procedure allowing the public to appeal enforcement actions such as citations, fines or an order to close a business to an elected county or city board.

Democratic Indianapolis Mayor Joe Hogsett said he supported Holcomb's veto and was grateful that the governor had allowed local officials to adopt tougher regulations to help stem the COVID-19 spread. He said he believed health experts should lead such decisions rather than elected boards.