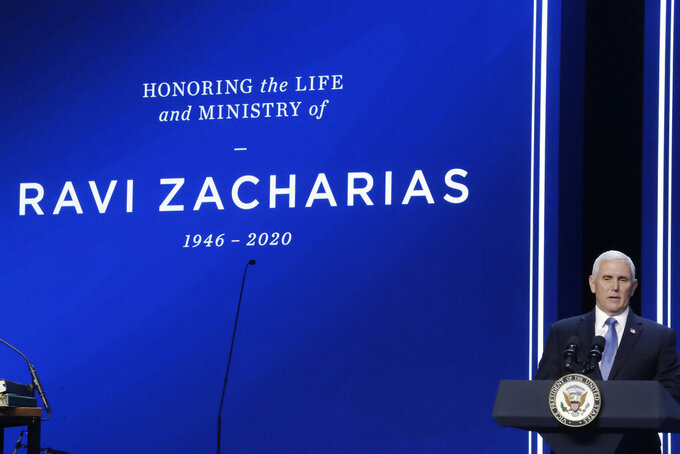 ATLANTA (AP) — The world has lost a great evangelist in Ravi Zacharias, who could use his intellect and kindness to make the case for the Christian faith, Vice President Mike Pence said Friday.

Pence spoke at a Georgia memorial service for Zacharias, who built an international ministry known for defending Christianity with intellectual arguments. Zacharias died May 19 at his home in Atlanta after a brief battle with sarcoma. He was 74.

Pence said Zacharias was his friend, and that God had put him at his side at the right moment in his life.

Zacharias was “armed with intellect, girded with truth and love," Pence said.

“Yesterday President Trump said that by making the intellectual case for Christianity, Ravi Zacharias was instrumental in helping millions of people around the world come to know the love and mercy of Jesus Christ," Pence said.

“His passing comes at a time when so many families here and around the world are grieving the loss of loved ones who have succumbed amidst the coronavirus epidemic," Pence added.

Americans “will miss Ravi’s comforting voice and his insights as we pick up the pieces of our national life and move forward," he said.

The Rev. Billy Graham invited Zacharias to preach at the inaugural International Conference for Itinerant Evangelists in Amsterdam in 1983, Ravi Zacharias International Ministries said in a statement after his death.

He rose to prominence as a defender of the “intellectual credibility” of Christianity, the ministry said.

The ministry’s mission is “helping the thinker believe and the believer think.”

Pence spoke of that mission at Friday's memorial service, calling Zacharias “a man of faith who could rightly handle the word of truth like few others in our time."

“His travels would take him to stand in venues that were oftentimes unfriendly and unwelcoming," Pence said. “But he’d always answer the arguments of the skeptic or the cynic, giving the reason for the hope that he had but doing so with gentleness and respect, recognizing at the other end of the question was always a person made in the image of God.”

Professional athlete Tim Tebow was among many prominent people who asked for prayers for Zacharias’ family and ministry following his death.

“When giants fall, the impact is felt near and far,” Pence said. “So it was in Atlanta, around America and around the world on May the 19th, when this gentle giant of the faith, on whose shoulders so many of us have leaned, was with us no more.”