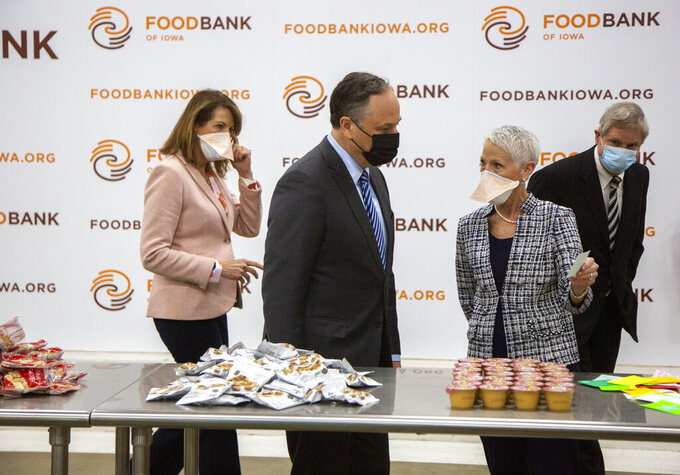 “Hunger is a real issue in this country. I saw it during the campaign all over the country," Emhoff said. Seeing food banks in action makes it possible "to talk about it a way that makes sense."

They walked among food boxes stacked almost as high as the 20-foot ceilings in a warehouse nearly as long as a football field. They also visited food bank volunteers packing mandarin oranges, milk, juice, ravioli, cereal bars and cereal to be packed in students' backpacks and taken home for weekends, said Food Bank of Iowa CEO Michelle Book.

Book said the warehouse east of downtown Des Moines distributed food directly to about 5,000 people during a mass distribution event in April 2020, as well as sending it out to food pantries and other distribution channels.

Food needs accelerated as the pandemic caused businesses to close and people lost their jobs.

“The need immediately doubled and we had to do that to get food to people,” Book said

During a roundtable discussion, Emhoff and Vilsack announced a 15% increase in benefits in the Supplemental Nutrition Assistance Program through September 2021. The estimated $3.5 billion expense was funded in the recently passed bill.

Emhoff said the benefits increase “is a massive victory for Americans all over the country.”

Vilsack said the bill will provide about $28 more per person, per month in additional SNAP benefits.

"We have 43 million Americans in this country today that are living in homes where at the end of the month there just simply may not be enough to eat," Vilsack said.

Axne noted that even though Iowa is a national leader in food production, there is great food insecurity in the state.

“Unfortunately in a state that’s called the breadbasket of the world, 20 to 25% of our kids have food insecurity here, not to mention adults, so we’ve got a long way to go,” Axne said.

The Biden relief plan includes roughly $12 billion in food aid, according to the Center on Budget and Policy Priorities. It would extend through September an increase in the SNAP program, as well as a program that gives funding for groceries to help feed children who previously received meals through their schools. The most recent pulse survey from the Census Bureau’s Household found that more than 22 million households lacked a sufficient amount of food on a weekly basis.

Emhoff is scheduled to travel to Omaha, Nebraska on Tuesday and St. Louis, Missouri on Wednesday.