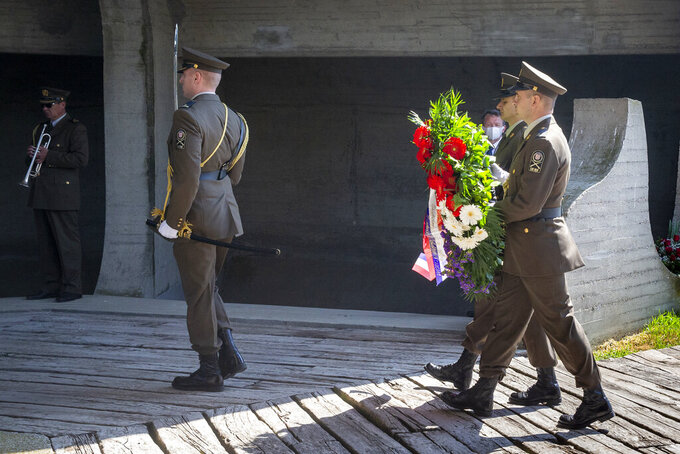 Honor guards carry flowers during a commemoration ceremony for the victims of a World War II camp in Jasenovac, Croatia, Wednesday, April 22, 2020. Representatives of the Croatian Jews, Serbs, Roma and anti-fascists for the first time in years agreed to join top Croatian officials at the ceremony, but warned this was because of the emergency situation over the new coronavirus and could change unless the authorities do more to curb right-wing sentiments in the country. (AP Photo/Darko Bandic)

JASENOVAC, Croatia (AP) — Jews, Serbs, Roma and anti-fascists joined top Croatian officials for the first time in years Wednesday in commemorating the victims of a notorious World War II concentration camp, but the community representatives warned that more needs to be done to curb right-wing sentiments in the European Union country.

The delegations laid wreaths and flowers at the memorial site for the Jasenovac camp complex, where tens of thousands of people were brutally executed by the pro-Nazi regime that ruled Croatia during the war.

Annual observances at the memorial south of Zagreb mark the attempted escape by 1,073 prisoners as the camp was being dismantled and its remaining occupants killed in April 1945. No official program took place at this year's 75th anniversary commemoration to prevent crowds from gathering during the coronavirus pandemic.

Jewish community representative Ognjen Kraus said the attendance by victims' representatives was a sign of good will following their four-year boycott of the ceremonies for the Croatian government's alleged inaction in addressing far-right activity.

Kraus warned that he “most certainly" won't come next year, if nothing changes.

“I came to offer my hand. I am ready for serious discussion about the government's position toward the past," said Kraus. “We most certainly won't be here next year unless this is solved."

Right-wing sentiments that include glorifying the wartime Ustasa regime are strong among extremist groups in Croatia. Critics argue the current conservative government has failed to resolutely counter such ideas and the use of pro-Nazi signs and salutes.

“We have done a lot and our policies and statements are firm and clear," he said.

Meanwhile, a gathering of thousands of Croatian far-right supporters in southern Austria to commemorate the massacre of pro-Nazi Croats by communists at the end of World War II has been canceled because of the pandemic.

For Croatian nationalists, the annual event held in early May near the village of Bleiburg symbolizes their suffering under communism in the former Yugoslavia before they fought a war for independence in the 1990s.

Croatia is the European Union's newest member nation and the current head of the bloc's rotating presidency.