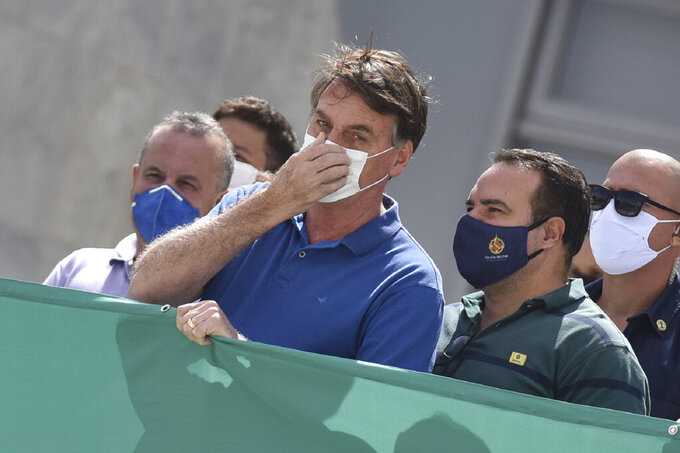 FILE - In this May 17, 2020 file photo, Brazil's President Jair Bolsonaro, wearing a protective face mask as a precaution against the spread of the new coronavirus, joins in a protest against the Supreme Court and Brazil's National Congress, in Brasilia, Brazil. A profanity-laced video showing Bolsonaro expressing frustration at his inability to get information from police and vowing to change Cabinet ministers if needed to protect his family was released Friday, May 22, 2020, at the order of a Supreme Court justice in a new blow to a president whose popularity has been sagging. (AP Photo/Andre Borges, File)

SAO PAULO (AP) — A profanity-laced video showing Brazilian President Jair Bolsonaro expressing frustration at his inability to get information from police and vowing to change Cabinet ministers if needed to protect his family was released Friday at the order of a Supreme Court justice, a potential new blow for a leader whose popularity has been sagging.

The two-hour video of a Cabinet meeting, with portions redacted, was released as part of a probe into allegations that the president was trying to improperly meddle in a criminal investigation of his sons, a claim made by former Justice Minister Sérgio Moro when he resigned last month.

Moro told investigators Bolsonaro openly demanded he make changes in key federal police positions, including the head of the agency. Moro resigned after Bolsonaro fired the federal police director-general without consulting him.

In a social media posting after the video was released, Bolsonaro said that “another farce has been dismantled” because there was “no indication of interference in the federal police.”

The video shows the president complaining, "I already tried to change our security in Rio de Janeiro and I couldn’t. That is over. I will not wait (for them) to (profanity) my entire family just for fun, or a friend of mine.”

Bolsonaro has insisted he was referring to the head of his security detail, though he had successfully changed that position recently. Moro said the president was alluding to the head of police operations in Rio, who presumably might have been involved in investigations into the president's sons, who live there.

At another point, the president also complains about his inability to get information from the police or other agencies.

“I have the power and I will interfere in all ministries, no exception,” he said.

Bolsonaro's popularity has been dropping in part due to the resignation of Moro, who is widely praised as an anti-corruption crusader, and also to his attempts to minimize the coronavirus pandemic, which has now killed more than 20,000 Brazilians and at an increasing pace.

The president frequently appears enraged in the video. He insults governors who are enforcing stay-at-home measures during the pandemic, threatens to fire ministers who are praised by the media and defends the view that all his countrymen should have weapons.

Facing isolation from others in Brazil's political arena, Bolsonaro also said he would not accept being removed from office because of his disregard for health recommendations on the best ways to curb the spread of the coronavirus.

“If I have to go down one day, may we fall fighting, for a good reason. Not for a stupid anti-virus exam, for the love of God,” he said.

Bolsonaro tested negative for a coronavirus infection three times in March after taking a flight with two dozen passengers who tested positive.

Education Minister Abraham Weintraub said Supreme Court justices should all be jailed. He also said he hates the term indigenous peoples, adding: “There is only one people in Brazil, it is the Brazilian people."

Celso de Mello, the Supreme Court justice, said in his decision to release the video that Weintraub committed “an apparent crime against the honor of members” of Brazil's top court.

In another part of the video, Human Rights Minister Damares Alves said she will ask for the arrest of governors and mayors fighting the coronavirus with restrictive measures.

“We are raising the tone and the speeches are coming. Our ministry will start to get nasty with governors and mayors,” she said.

Environment Minister Ricardo Salles, an ally of Brazil's agricultural lobby, said the far-right administration should seize on the pandemic to change rules and regulations for the agribusiness sector.

“The press is giving us some relief with the other themes going,” Salles said. “We can pass reforms to deregulate, simplify” environmental governance, he said.

During the meeting, Bolsonaro complained that he has struggled to govern, saying he doesn't know “where our boat is going to.”

“It might be heading toward an iceberg,” he said.