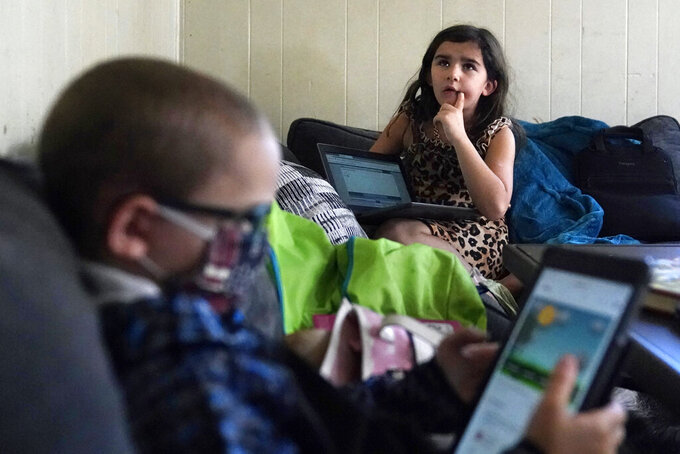 Third grade student Elena thinks while reciting multiplication tables, as her brother Wyatt reviews his kindergarten work on a tablet with their mom, Christi Brouder, in the living room of the family home, while remote learning due to the COVID-19 outbreak, Wednesday, Oct. 14, 2020, in Haverhill, Mass. The Brouder family has four children that are distance learning. Many families with multiple students, some with special needs, are dealing with the challenges of remote distance learning in their home. (AP Photo/Charles Krupa)

Christi Brouder had finally gotten her 10-year-old daughter settled on the hallway floor with a laptop and signed into a video class on Google Meet when the girl's 6-year-old brother leaped over the computer screen “in his birthday suit” to get a juice box.

To Brouder's surprise, a social worker from the Massachusetts Department of Children and Families called her later that day; someone had reported an adult male exposing himself during the class. That was followed by a visit from a police detective sent by the school to do an in-person wellness check.

Brouder explained that her son has epilepsy and autism and sometimes takes his clothes off to feel more comfortable and the inquiry ended there.

But the experience left the mother in the city of Haverhill incensed, and underscores the challenge on educators to make judgments based on fleeting scenes or sounds from a webcam.

“The teachers never asked to speak to me. Nobody said anything” during the class, Brouder said.

Child protection laws require school personnel, along with health care workers and other professionals, to report any suspicions of neglect or abuse. The coronavirus pandemic and virtual instruction have only raised the stakes; in the absence of daily in-person school and extracurriculars, a teacher's video contact may offer the only window to spot potential problems in students' lives.

Many school districts that are still providing classes online have asked teachers to be on the lookout in students' backdrops for objects such as drug paraphernalia, caregivers who appear to be under the influence of drugs or alcohol, and children with injuries or poor hygiene or who are being demeaned regularly by adults.

It can be a difficult call.

“I’m making an assumption based on the tiny square that I have in view,” said Ryan, who teaches half her students in person while the other half tune in remotely.

Ryan said her colleagues have encountered loud, profane arguments in students’ homes that are audible not only to teachers, but classmates. Some of the children attending school only remotely already were on the radar of child protection agencies, she said.

“We are mandated reporters, but observing anything at this distance is nearly impossible,” she said.

Advocates worried about a sharp drop in reported cases of possible child endangerment when the coronavirus shut down schools in the spring. Teachers and other professionals who came into contact with a child through their jobs made about two-thirds of the 4.3 million reports that U.S. child protection agencies received in 2018, federal data shows.

“We can view this as a real negative while kids aren’t in school, and that is true, but we can also look at it from the perspective of, we’ve never had this much inside access into a student’s home life,” said Chris Newlin, executive director of the National Children’s Advocacy Center.

The NCAC and others have issued guidelines to help teachers identify warning signs in unfamiliar settings, advising them to be alert for students who appear to be unsupervised and to pay attention to how students interact with others in the home.

“There’s an opportunity for teachers to still see their kids and see if they have any injuries, very obvious things,” Newlin said, “but also what’s in the background.”

In some cases, it’s what teachers don’t see that is alarming, particularly when students repeatedly miss virtual school.

The school system in Tulsa, Oklahoma asked local police to check on two girls, ages 5 and 8, who were given laptops but not logging in at class time. Officers found the sisters home alone and were there when the mother returned home intoxicated, police said. She was charged with child neglect.

Elsewhere, including in New York City and Massachusetts, parents have pushed back at educational neglect allegations reported against them because students have missed class too many times.

Educators should be reasonable but not shy away from reporting things that make them uneasy, said Wendy Rock, a former school counselor who now teaches at Southeastern Louisiana University.

“A parent yelling at a child is not abuse....This is a stressful time,” Rock said. “But if a teacher sees something that gives them the feeling that the child is in danger, at the very least they need to consult with the school counselor.”

A teacher at Warfield Elementary School in Martin County, Florida didn't have time to sound a warning on the first day of school in August. Behind a 10-year-old girl attending class online, the teacher and other students heard a commotion unnerving enough that the teacher muted the girl's audio.

The teacher saw the girl cover her ears before the child's video window went blank. Investigators would later explain that a bullet had struck the student's computer when her mother was fatally shot in front of the girl, her three siblings and her two cousins. The mother's ex-boyfriend was charged with murder.

In Louisiana, it was a BB gun that caught the attention of fourth grader Ka Mauri Harrison's teacher. He was suspended him for six days after a report that he was holding “what appeared to be a full-sized rifle.” Ka Mauri had picked up the BB gun after his younger brother tripped on it, his parents said. He was suspended for violating an in-class instruction policy.

“They are treating it as if he brought a weapon to school,” Nyron Harrison, one of Ka Mauri’s parents, said.

“There may be a reasonable explanation or there may be something that's easy to dismiss" on its own, she said, but merits a call in the context of behavioral clues or comments.

She pointed to the case of a first- or second-grade student who was in the dark during video classes.

“The teacher just asked, `Can you turn on the lights?' And the student's response was `well, my parents are working and we have to keep the lights off while we're home alone,'" she said, "and so that was a referral to services.”

Edith Pride, an elementary school teacher in Boca Raton, Florida vented her frustration with the changing landscape during a recent school board meeting, drawing laughs even as she delivered a serious message.

“Parents, please make sure that you have on proper clothing when you are walking behind your child’s computer, because we’ve seen them in their drawers, their bras and everything else,” Pride said at the meeting. “Parents, when you are helping your children at their computer, please do not appear with big joints in your hands and cigarettes. Those joints be as big as cigars. Oh yeah, we’ve seen it all.”

“Teachers are feeling overwhelmed,” Pride said later by phone. “They’re feeling pressure. They’re feeling stressed out of their mind because you have so many different components to look at.”

Some parents say that even though their children never were in harm’s way, there were repercussions from teachers misinterpreting what they thought they had seen.

Brouder said she is working on her young son's behavior as she raises four children with special needs, but the police detective’s visit left her daughter unwilling to sign back in for online school out of fear someone in the family would get in trouble.

“There has to be open communication, where if a teacher has a concern or if they think something or they think they saw something that they normally wouldn’t have seen because they’re not in a parent’s home, talk to the parents,” she said. “Don’t just assume the worst.”

The Haverhill school district did not immediately respond to emailed requests for comment.

This story was first published on October 22, 2020. It was updated on October 23, 2020 to remove extraneous words and to correct the name of a Florida county where a mother was fatally shot in front of her children. It was Martin County, not Warfield County.