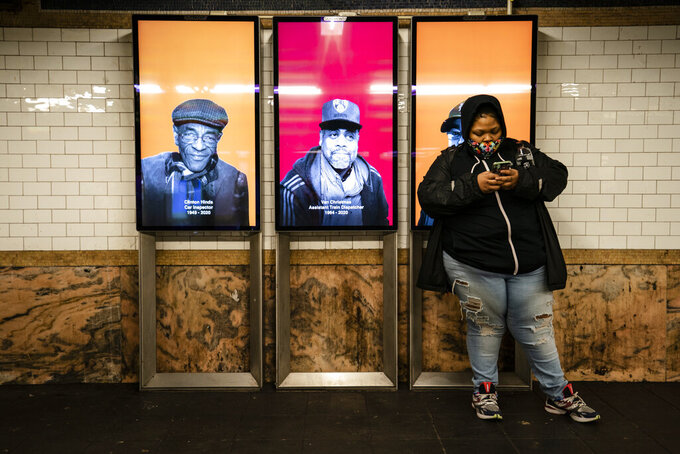 Faces of New York's Metropolitan Transportation Authority employees who died of COVID-19 are displayed at Fulton Street station, Monday, Jan. 25, 2021, in the Manhattan borough of New York. The MTA is honoring its 136 employees who have died from the virus since the pandemic began with a digital memorial at 107 subway stations. (AP Photo/John Minchillo)

NEW YORK (AP) — They were station agents and conductors, bus operators and cleaners, employees of the Metropolitan Transportation Authority who helped keep the trains running and the buses moving, now lost to coronavirus.

The MTA is remembering the 136 people who have died since the pandemic began in a digital memorial that was launched Monday at 107 stations throughout the New York City subway system.

The “Travels Far" memorial features a poem of that name by former U.S. poet laureate Tracy K. Smith, commissioned by the MTA, as well as photos of the workers provided by their families.

“Through stations and years, through the veined chambers of a stranger’s heart — what you gave travels far," the poem concludes.

“COVID-19 has been a devastating scourge on our entire country and, tragically, that includes the MTA’s workforce,” said MTA Chair and CEO Patrick Foye, who recovered from his own bout with the virus last spring.

“We quickly made sure that those families who lost an MTA worker to COVID were taken care of financially, but the launch of today’s memorial is aimed at personalizing the legacies of those who died during the pandemic,” he added.

The 8-minute video features the poem's text in seven different languages interspersed with photographs in groups of three. Many of those who have died were people of color, reflecting a broader reality of the pandemic.

The video is being played at the stations three times a day, and will be seen through Feb. 7. An online version is accompanied by an original score by composer Christopher Thompson.