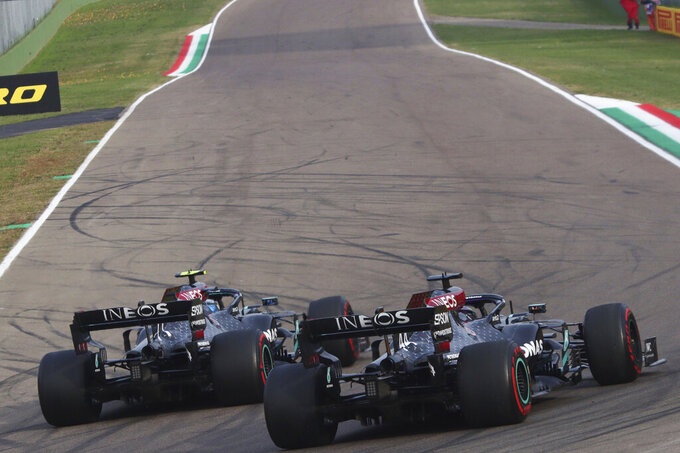 Mercedes driver Lewis Hamilton of Britain and Mercedes driver Valtteri Bottas of Finland make an honor lap next to each other after taking first and second place in the Emilia Romagna Formula One Grand Prix, at the Enzo and Dino Ferrari racetrack, in Imola, Italy, Sunday, Nov. 1, 2020. (Davide Gennari/Pool Photo)

ISTANBUL, Turkey (AP) — Formula One is planning a record 23 races in 2021, including one in Saudi Arabia, but has dropped its inaugural race in Vietnam from the schedule.

The April slot for the Vietnamese Grand Prix was listed as “TBC” on the calendar published on Tuesday with no explanation and no mention of Vietnam. The race was scheduled to debut this year but abandoned amid the coronavirus pandemic.

The other 22 races include the first-ever Saudi Grand Prix, set for Nov. 28 in the Red Sea city of Jiddah, and the return of numerous races which were canceled during the pandemic.

“We have proven that we can safely travel and operate our races and our promoters increasingly recognize the need to move forward and manage the virus. In fact, many hosts actually want to use our event as a platform to show the world they are moving forward," F1 chairman Chase Carey said.

The calendar is largely a retread of the original 2020 schedule, meaning no return for the various one-off races at European tracks such as Mugello, Portimao and Imola, which were added as replacements and were generally popular with drivers and fans.

The venue for the Brazilian Grand Prix is listed as Sao Paulo “subject to contract,” indicating a planned move from Sao Paulo's established Interlagos track to a new circuit in Rio de Janeiro will not take place. Champion Lewis Hamilton has voiced concern that an area of forest will be cut down to build the Rio venue.

The Dutch Grand Prix returns for the first time since 1985, after being canceled this year, and is scheduled for Sept. 5.

The season starts with the Australian Grand Prix on March 28. The race in Melbourne was canceled hours before Friday practice was to begin this year after a positive coronavirus test for a crew member. The finale remains in Abu Dhabi on Dec. 5.

The 23-race calendar is the longest in F1 history. The 2020 calendar originally had 22 races.