Vikes' Pierce had regrets about opt-out, but made most of it 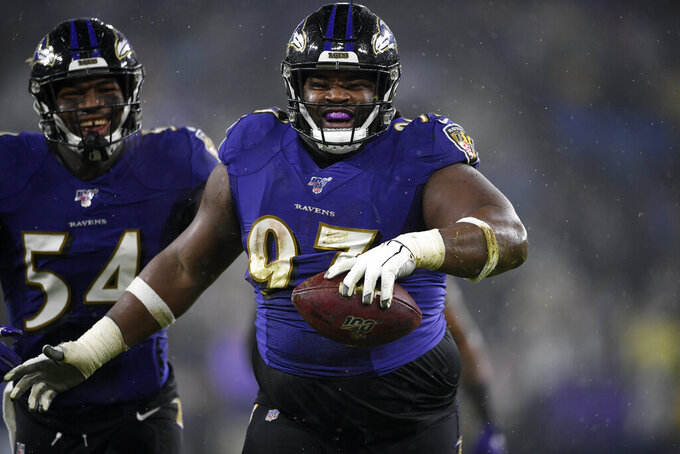 FILE - In this Sunday, Dec. 29, 2019, file photo, Baltimore Ravens defensive tackle Michael Pierce (97) celebrates his fumble recovery with linebacker Tyus Bowser (54) during the first half of an NFL football game against the Pittsburgh Steelers in Baltimore. After opting out of the 2020 season due to health concerns around COVID-19, Michael Pierce has returned to the Minnesota Vikings, eager to establish himself at a nose tackle position in need of help. (AP Photo/Nick Wass, File)

MINNEAPOLIS (AP) — Michael Pierce is 28 years old, entering what ought to be the prime of his career in the NFL as a run-stopping nose tackle.

In 2020, after he signed with the Minnesota Vikings but opted out of the season because of health concerns surrounding COVID-19, Pierce had an early vision of his retirement.

Parts of the picture were pretty, given ample, stress-free time for self-examination and goal-setting. He tried to pick up piano playing. He bought a dog. He focused on philanthropy, with the initiation of a family foundation. He dabbled in real estate dealings, aiming to ensure his parents don't have to worry about money. Well ahead of schedule, Pierce gained some valuable direction for his post-football life during quarantine in his native Alabama.

His snapshot of future Sundays didn't look as good. Missing the game, and the guys he wanted to be on the field with, was a year-long ache.

“There were, for sure, many times where I would say ‘Dang, I could’ve been out there,’” said Pierce, who helplessly watched a previously mighty Vikings defense deteriorate along with the rest of their fans during a season largely wrecked by costly injuries and inexperienced replacements.

The nervous pregame energy was first channeled into exercise.

“I got on my Peloton. I hopped in the sauna, went to church, and by that time it was 12 o’clock. Had me a good, nice meal, got me a glass of wine and watched Vikings football just like everybody else,” Pierce said, adding: "I made the most of it.”

Pierce has suffered from asthma since he was a child. After conferring with his doctors and trying to take in as much information as he could from the ever-evolving science around a new upper respiratory disease that has now killed more than 545,000 people in the U.S. alone, Pierce decided last summer to err on the side of caution by sitting out.

The 6-foot, 340-pound Pierce acknowledged in a video interview with reporters Wednesday that he regretted doing so, at times last year. In an agreement between the NFL and the NFL Players' Association, opt-outs had to be declared prior to the start of training camp.

“I felt rushed, but it’s a business, and things have to go on,” said Pierce, who was categorized as a high-risk opt-out and thus received a $350,000 stipend and a credited season of service time. His three-year, $27 million contract — including $18 million in guaranteed money — tolled to 2021 and begins this season.

The Vikings invited him to their practice facility this week so he could get the full free agent tour he missed out on last year after the pandemic began. He checked in in good condition, after struggling at times with his weight over four seasons with the Baltimore Ravens. Having a personal chef at home helped over the past year, as did CrossFit workouts he added to his routine.

“It also just gave me some time to see how much I love the game,” Pierce said. “Most vets normally tell you they don’t look forward to camp, but I missed practice and just missed the camaraderie and friendship, all those things you hear retired guys talking about. I felt that early. For me, it will make this season and the coming seasons that much more special.”