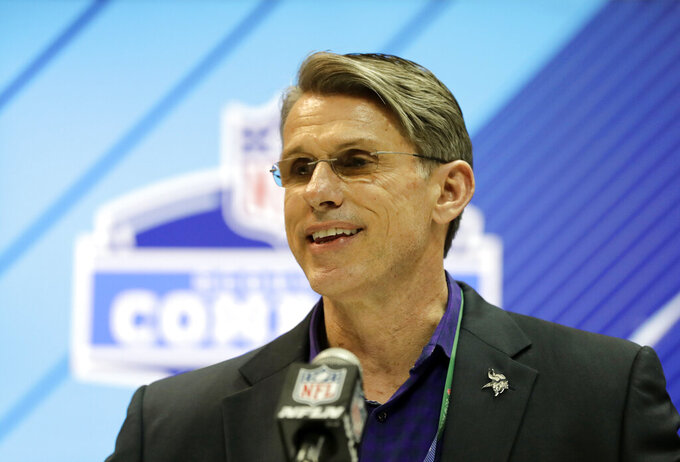 MINNEAPOLIS (AP) — The Minnesota Vikings have doubled down on their reliance on stability as a vital ingredient for securing that elusive Super Bowl trophy.

The Vikings signed general manager Rick Spielman to a multi-year contract extension on Monday, matching their recent commitment to head coach Mike Zimmer and making the latest move toward maintaining continuity among the club's key leaders.

The Vikings did not divulge the length of Spielman's deal, but Zimmer signed a three-year extension last month. Their previous contracts were synced to expire simultaneously. Both Spielman and Zimmer had begun the final season of their contracts, until gaining the extra measure of job security this summer. This year, with the COVID-19 pandemic delaying the start of practice and causing all kinds of havoc on the sport, the status quo could be more important than usual.

“As we’re going through some of these new challenges that we have to face, that everybody has worked together so long and the culture that we have in this building plays a critical piece to our success,” Spielman said.

Spielman was hired in 2006 as vice president of player personnel. He had his role elevated to general manager with full authority over the roster in 2012. Since that promotion, the Vikings have made the playoffs four times in eight seasons, with two NFC North titles. They are 72-54-2 over that span, the fourth-best record in the NFC.

The Vikings, like most teams, have had a few costly first-round busts, but their drafts since he took over have frequently been productive. Most of their core players — including safety Harrison Smith, linebackers Anthony Barr and Eric Kendricks, defensive end Danielle Hunter, running back Dalvin Cook, tight end Kyle Rudolph — were drafted under Spielman.

As for free agency, the verdict on the value the Vikings have received for their investment in quarterback Kirk Cousins is still pending. They've drafted well enough, though, to divert most of their salary cap space toward second contracts for homegrown players rather than having to frequently overspend on the open market.

On a video conference call with reporters, Spielman was asked what he sees as his signature on this competitive yet title-lacking team.

“I think it’s hopefully the type of leadership that I bring to the organization, trying to put others first, trying to give everybody the ability to do their job, the freedom to do their job and flexibility to come up with creative new ways to look at things,” Spielman said. “Because I think if you stay the same and you don’t change, you’re going to get stuck.”

The franchise's family ownership group, led by Chairman Zygi Wilf and President Mark Wilf, that acquired the team in 2005 has long favored stability at the top. Zimmer is in his seventh year, tied for seventh among NFL head coaches for longest tenure with their current team.

“Rick and I have a great relationship. We see things really through the same eyes 99% of the time. Very, very rarely do we ever argue or get in a situation like that. He can be hard-headed. I can be hard-headed. But at the end of the day we know that we both have to work extremely well together, and we certainly do,” Zimmer said.

The next extension could go to Cook, who has begun the final year of his rookie contract. He reported to team headquarters last week as required for the first round of virus testing, but it's unclear whether he will take part in practices without a new deal once on-field work begins later this month.

“I’m not going to sit here and talk about the business side, but I know how important Dalvin Cook is, and I know we’ve been working closely with his agent, and we’ll continue to work to try to see if there’s a deal that we feel is not only fair to Dalvin but fair to us as well,” Spielman said. "I can’t predict the future, so I just know where we’re at now, and we’re working extremely hard with him and his agent on trying to come to a common place where we can get him locked up.”