Virgin Australia plans to shed staff under new US owners 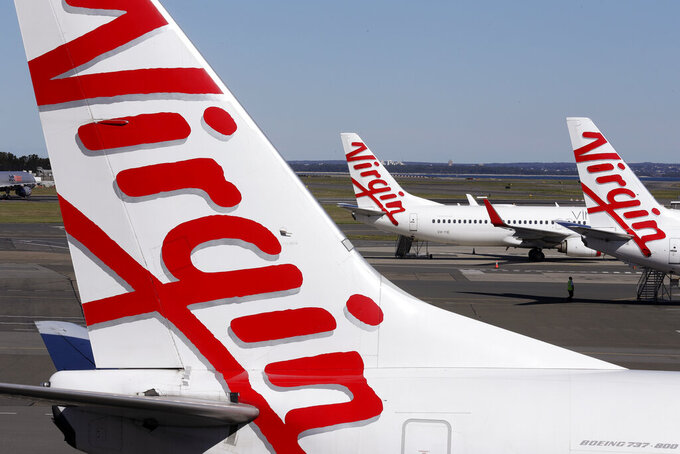 Virgin Australia planes are parked at terminal at Sydney Airport in Sydney, Wednesday, Aug. 5, 2020. Virgin Australia will cut about 3000 jobs as the airline struggles with the effects of the coronavirus pandemic. (AP Photo/Rick Rycroft)

CANBERRA, Australia (AP) — Virgin Australia plans to scale down its operations under new U.S. owners and shed a third of its staff as the carrier adjusts to the pandemic, the nation’s second-largest airline said on Wednesday.

The Brisbane-based company in April became the world’s largest airline to seek bankruptcy protection after the coronavirus pandemic virtually grounded the aviation industry.

Virgin’s administrator Deloitte’s has entered into a binding agreement to sell the airline to the Boston-based investment firm Bain Capital. The deal will go within weeks for final approval to a meeting of Virgin creditors who are owed 7 billion Australian dollars ($5 billion).

The Virgin Australia Group chief executive and managing director Paul Scurrah announced plans to cut 3,000 jobs plus long-haul flights from Australia to Los Angeles and Tokyo to try to reset the business for lower global demand.

The domestic and short-haul international fleet would become all Boeing 737s, except for regional and charter aircraft. Boeing 777s and Airbus A330s would be shed.

Virgin’s budget subsidiary Tigerair Australia would be discontinued, as would its Airbus A320s.

“Demand for domestic and short-haul international travel is likely to take at least three years to return to pre-COVID-19 levels, with the real chance it could be longer, which means as a business we must make changes to ensure the Virgin Australia Group is successful in this new world,” Scurrah said in a statement.

While the workforce would be slashed to 6,000, the airline hopes to build back up to 8,000 staff as the aviation market recovers.

Backed by Bain Capital, with more than $100 billion assets under management, Virgin Australia would have “a strong balance sheet to withstand material future shocks to the industry,” Scurrah said.

The airline sought bankruptcy protection after the Australian government refused its request for a AU$1.4 billion ($1 billion) loan.

Australia’s Treasurer Josh Frydenberg told reporters at the time his “government was not going to bail out five large foreign shareholders with deep pockets who together own 90% of this airline.”

Rival Qantas Airways argued that it had three times more revenue than Virgin and was therefore entitled to a AU$4.2 billion ($3 billion) loan if the smaller airline was not to gain an unfair advantage.