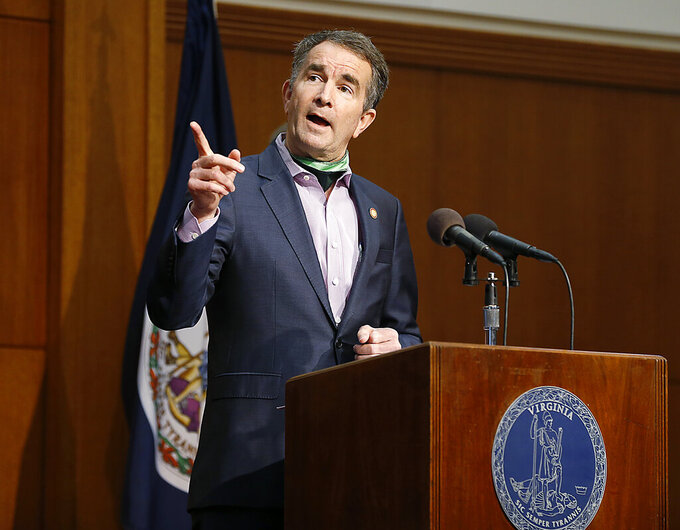 RICHMOND, Va. (AP) — Democratic Gov. Ralph Northam rejected a call Tuesday from several top GOP lawmakers to institute a moratorium on the release of certain inmates by the Virginia Parole Board, which has come under criticism for some recent decisions.

The request from the lawmakers, including the House and Senate minority leaders, came a day after state officials disclosed that Virginia's government watchdog is conducting an administrative investigation into the board's decision to grant parole to a man who has served decades of a life sentence for the killing of an on-duty Richmond police officer.

Northam's spokeswoman, Alena Yarmosky, said in a statement that the governor “rejects” the Republicans' proposal.

“The Governor and his administration have worked tirelessly to create a fairer and more equitable criminal justice system, and safe parole is an important part of that work,” she wrote.

Virginia Parole Board Chair Tonya Chapman announced Monday that the Office of the State Inspector General is conducting an investigation into the board's decision to release Vincent L. Martin, who was convicted in the 1979 killing Richmond patrolman Michael P. Connors. Martin's release, which had been scheduled for Monday, was delayed.

In addition, The Associated Press and other news outlets have reported on recent cases across the state in which prosecutors and victims' families have raised concerns about what they have said is a lack of timely or sufficient notification of the release of violent offenders.

The lawmakers cited AP's reporting, writing: “It is unconscionable that victims’ families have not received proper notification, as required by law, of these disgraceful decisions.”

“The remedy to further miscarriages of justice is simple and obvious. A moratorium on the early release of violent felons will restore confidence in our justice system, demonstrate respect for victims and their families, and ensure the safety of all Virginians," said the statement from House Republican Leader Todd Gilbert, Senate Republican Leader Tommy Norment, and the immediate past chairmen of the House and Senate Courts of Justice Committees, Del. Rob Bell and Sen. Mark Obenshain.

The parole board — a five-member panel of gubernatorial appointees — has accelerated its work because of the coronavirus pandemic, one of several efforts by the Northam administration to reduce the population of the state's jails and prisons where compatible with public safety. Correctional facilities, like other congregant settings such as nursing homes, are vulnerable to the spread of the virus.

Because of the nature of Virginia's parole laws, the majority of offenders eligible for parole are serving lengthy sentences for violent crimes. Brian Moran, Virginia's secretary of public safety and homeland security, said Monday at a news conference that while the board reviewed “an extraordinary” number of cases in March — the most recent month for which decisions have been made public — it rejected over 80% of them.

Kim Rolla, interim director of the Civil Rights & Racial Justice Program at the Legal Aid Justice Center, wrote in an email that calling for a blanket ban on parole for people convicted of certain offenses is directly contrary to Virginia code, which outlines a number of factors the board must consider in addition to the person's history.

“The Parole Board must make decisions based on the facts of each individual case and the law; not broad brush ‘tough on crime’ rhetoric,” Rolla wrote.