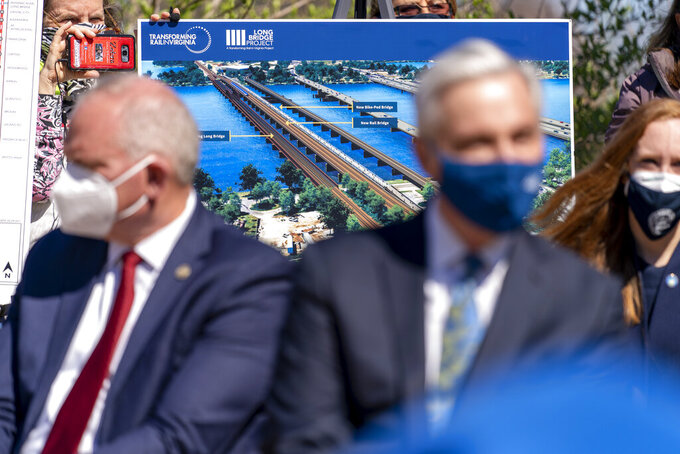 U.S. Transportation Secretary Pete Buttigieg attended Tuesday's signing ceremony at the Alexandria Amtrak station and said it is a preview of what can be accomplished if Congress passes a massive infrastructure bill that President Joe Biden is expected to unveil Wednesday.

“While colossal, this is just the beginning of what's possible for infrastructure in this country,” Buttigieg said after the deal was signed.

The broad outline of Tuesday's agreement was announced in December 2019, but took more than a year to formalize with multiple agencies and approvals involved.

A major piece of the puzzle is construction of a new Long Bridge over the Potomac River for passenger rail.

The project will allow Amtrak to double service between Richmond and the nation's capital. And the state's commuter rail service, Virginia Railway Express, expects a 60 percent increase in service, including weekend and late-night service for the first time.

Northam said the rail project is one-third the cost of adding lanes to Interstate 95 in Virginia and just as effective at getting people where they need to go.

“We know that many essential jobs are not 9 to 5, Monday through Friday. The 21st century needs a train schedule to match,” he said.

In addition to northern and central Virginia passenger and commuter rail, the project will increase Amtrak service to Newport News and Norfolk. It includes right-of-way acquisition from Petersburg to Ridgeway, North Carolina, and from Doswell to Clifton Forge. Officials said the Petersburg acquisition could facilitate expansion of high-speed rail service, while the Clifton Forge acquisition can be used to expand east-west passenger service.

Of the $3.7 billion, Virginia is paying $525 million to CSX Transportation for acquisition of right-of-way and infrastructure. The remaining $3.2 billion will be used to fund infrastructure projects to expand rail capacity between Richmond and Washington.

The work is not expected to be completed until 2030.

The multibillion investment in passenger and commuter rail comes at a time when VRE ridership is down 90 percent because of the pandemic. After Tuesday's ceremony, Northam said he's confident that demand for commuter rail will rebound as the pandemic wanes.

“Absolutely. If you look at the history of this country, I mean, people are big fans, generally speaking, of rail. You’re taking for granted – not everyone has access to automobiles,” Northam said.