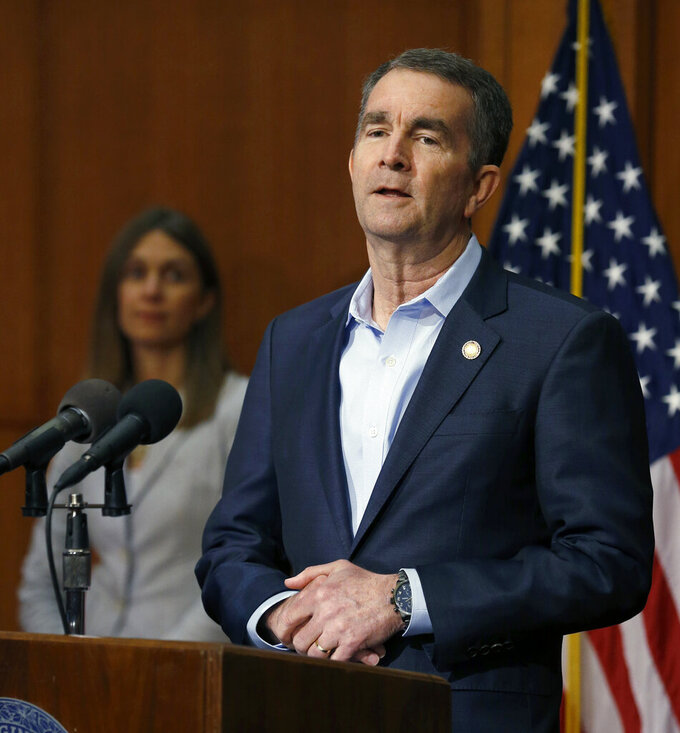 Virginia Governor Ralph Northam speaks during his press briefing during the coronavirus outbreak inside the Patrick Henry Building in Richmond, Va., Friday, April 10, 2020. Behind him is Dr. Laurie Forlano, Deputy Commissioner, Population Health for the Virginia Department of Health. (Bob Brown/Richmond Times-Dispatch via AP)

Northam said that the jail population in the state was 24,000 on April 7, down 17% from March 1. Virginia has also seen a 67% decline in the number of new commitments for misdemeanors across the state.

Northam said the reduction was achieved through various steps, including decreasing the number of low-risk offenders being held without bail in jails, diverting offenders from being admitted into jails before trial by using summonses in lieu of arrests, and using alternatives to jail such as home electronic monitoring.

Critics, however, say the state hasn’t moved quickly enough to reduce the number of people being held in state prisons, which are considered high-risk locations for the spread of the virus.

Inmate advocates, including the Legal Aid Justice Center, have urged Northam to use his executive clemency powers to grant pardons to high-risk inmates and those who are close to their release dates. They’ve also asked the Parole Board to expedite early release of certain inmates.

Brian Moran, the state’s Secretary for Public Safety and Homeland Security, said earlier this month that the Parole Board approved the early release of 96 inmates in March.

Northam has proposed a budget amendment to allow the Department of Corrections to release inmates with less than a year left to serve in their sentences for the duration of the state of emergency. The legislature is set to reconvene on April 22 to consider Northam’s amendments to legislation, which includes the budget. If the amendment is adopted, it will become effective immediately.

As of late Friday, the Department of Corrections reported that a total of 80 inmates and 50 DOC staffers have tested positive for the virus. One inmate has died.