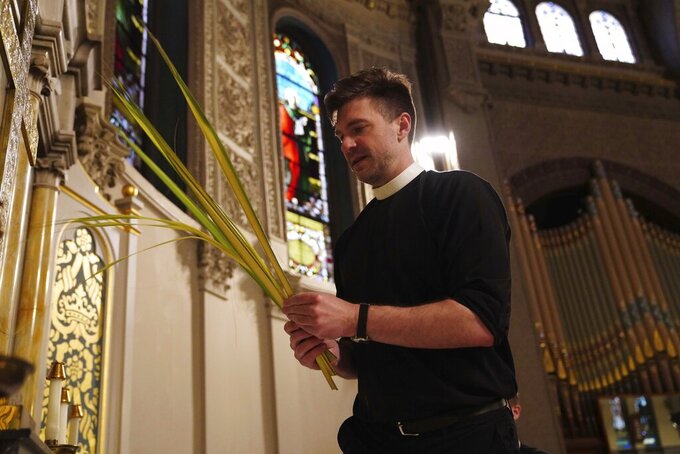 In this Sunday, March 29, 2020 photo, Rev. Steven Paulikas decorates an altar with palm fronds for Palm Sunday, which will be commemorated virtually this year, at All Saints' Episcopal Church in the Brooklyn borough of New York. The global coronavirus pandemic is upending the season's major religious holidays, forcing leaders and practitioners across faiths to improvise. (AP Photo/Emily Leshner)

For Pope Francis at the Vatican, and for Christians worldwide from churches large and small, this will be an Easter like none other: The joyous message of Christ’s resurrection will be delivered to empty pews.

Worries about the coronavirus outbreak have triggered widespread cancellations of Holy Week processions and in-person services. Many pastors will preach on TV or online, tailoring sermons to account for the pandemic. Many extended families will reunite via Face Time and Zoom rather than around a communal table laden with an Easter feast on April 12.

Pope Francis, the first pontiff from Latin America, will be celebrating Mass for Palm Sunday, Holy Thursday and Easter in a near-empty St. Peter's Basilica, instead of in the huge square outside filled with Catholic faithful.

In the pope’s native Argentina, the archbishopric of La Plata encouraged the faithful to use any type of plant at home for a “virtual” blessing that will be livestreamed during Palm Sunday services this weekend.

The pandemic has prompted cancellation of a renowned annual tradition of sawdust and handmade flower carpets coating the streets of Antigua, a colonial Guatemalan city, during its Holy Week procession. Instead, some residents will make smaller carpets to display outside their homes.

“We know this is happening because of some message from God,” said Cesar Alvarez, who has been making the multicolored carpets with his family for 28 years. “But we’re taking it with a lot of sadness.”

In some communities, there are innovative efforts to boost Eastertime morale.

At Asbury United Methodist Church in Prairie Village, Kansas, family ministries director Heather Jackson is organizing an Easter egg hunt that embraces social distancing. Parents and children are creating colorful images of Easter eggs to display in windows or on garage doors, and the "hunt" will entail families driving around in their cars, or strolling on foot, trying to spot as many eggs as possible.

"It's about keeping people safe while maintaining that sense of joy," Jackson said. “It will be a difficult time, because it's a time for families to come together and right now we just can't do that.”

If not for the virus, 32-year-old Chris Burton — a writer, teacher and devout Baptist in Brooklyn, New York — would be planning a trip to Maryland for Easter dinner with his family.

Instead, he plans to watch the online service of his church, Trinity Baptist, and then catch up with relatives by phone.

Burton, who has experienced five bouts of pneumonia since 2011, has blogged about the need to shelter in place. Yet he still hopes this Easter will rekindle the uplifting emotions he's cherished since wearing his Easter suit in childhood.

"All that's happening doesn't mean we need to be somber," he said.

In Venezuela, Catholic officials said that after the Holy Week liturgies, some priests would try to take the Blessed Sacrament -- the wine and bread of Holy Communion -- on a vehicle and, using loudspeakers, invite congregants to join in spirit from their windows and balconies.

A similar used of priest-carrying vehicles was proposed in the Philippines, Asia's bastion of Catholicism.

Many faithful across Latin America say they'll miss Holy Week's observances, yet there is acceptance of the cancellations.

“It’s sad because we can’t be with our Lord in his Calvary, but it’s fine,” said Felipe Navarrete of Santiago, Chile. “The health of the population comes first, and we have to be responsible with older people who join these rituals the most.”

Many pastors are pondering their upcoming Easter sermons, including the Rev. Steven Paulikas of All Saints Episcopal Church in Brooklyn. His sermon will be transmitted online but delivered in an empty church.

"It's started me thinking about the empty tomb," he said, referring to the biblical account of Christ's resurrection after his crucifixion.

"That emptiness was actually the first symbol of this new life," Paulikas said.

On the evening of April 9 -- Holy Thursday commemorating the Last Supper of Jesus and his apostles -- Paulikas is organizing a communal supper for his congregation, hoping members will join via Face Time.

At St. Ambrose Catholic Church in Brunswick, Ohio, Father Bob Stec also is organizing a pre-Easter initiative, arranging for each of the parish’s 5,500 families to get a friendly call from another member.

"We're going to try to flood their senses visually and audibly with the sounds and images that will give them hope," he said.

Stec knows the key point of his own message.

"This is one of those wake-up calls," he said. "We're more aware than ever how desperately we need God in our lives."

In Atlanta, an Easter message for Emory University is being prepared by Robert Franklin, a professor at Emory's Candler School of Theology.

"The first Easter with its joyful surprise emerged out of suffering, fear, suspicion, death, sorrow and grief," Franklin writes. "Easter in the time of COVID-19 is closer existentially to that first Easter than to our customary cultural festivals of self-indulgence and triumphalism."