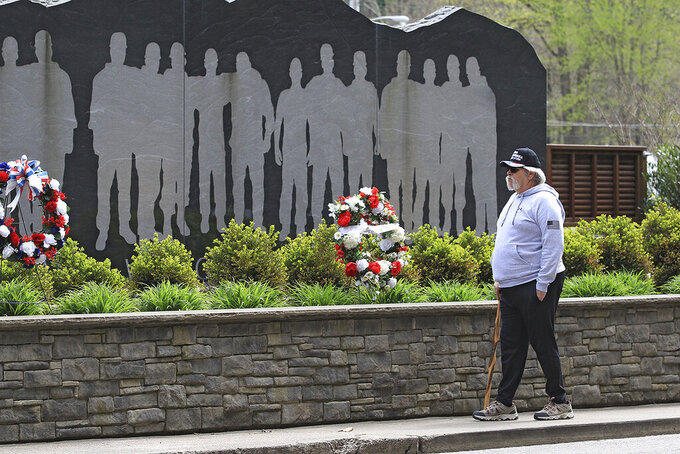 A visitor walks in front of the Upper Big Branch Miners Memorial on the 10th anniversary of the explosion in Whiteville W.Va., Sunday, April 5, 2020. (Jenny Harnish/The Register-Herald via AP) 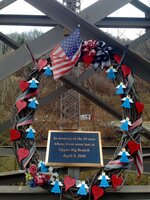 CHARLESTON, W.Va. (AP) — A planned public gathering was shelved on the 10th anniversary of the worst U.S. mining disaster in decades. Heartfelt speeches gave way Sunday to silent remembrances and individual prayers for the 29 men who died at the Upper Big Branch mine in West Virginia.

The coronavirus pandemic prompted the decision weeks ago to cancel the event. Instead, mourners were allowed to lay wreaths from dusk to dawn at a memorial site in Whitesville, not far from the mine.

Virus scare or not, Tommy Davis was going regardless. Davis was working at the mine on April 5, 2010. He lost a son, brother and a nephew.

“This corona is just what it is. It’s life,” said Davis, who is now retired. “I’ll be there to pay my respects and do my remembering and set out my flowers as I usually do. I’m doing my normal thing. I don’t change nothing up regardless of what’s going on in the world around us.”

Another Upper Big Branch retiree, Stanley Stewart, said he agreed with the decision to cancel the memorial event.

Stewart has skipped visiting the memorial every year in favor of personal reflections at home on the date of the anniversary. This year was no different.

He and his wife planned to observe a moment of silence at 3:02 p.m, the time of the explosion, "and just show a little bit of respect and try to go on.”

Worn and broken cutting equipment created a spark that ignited accumulations of coal dust and methane gas at the mine. Broken and clogged water sprayers allowed what should have been a minor flare-up to become an inferno.

Stewart was 300 feet (about 91 meters) inside the mine when it blew up and has described the blast as feeling like “hurricane force winds." He tried to revive some of his fallen co-workers, then covering their bodies with blankets, their faces obscured by black soot.

“I sometimes go along trying not to think about it, but it don't work,” Stewart said. "It's kind of painful, this being the 10th one. The 10th one ain't no different from the first one. I just know it'll come and it'll go, which is the good thing about it.”

Just a month ago, Stewart was in New York City attending the off-Broadway play “Coal Country” and meeting the actors.

The play is about the explosion and is based on interviews with Stewart, Davis and others. It's about pain and suffering, something that New Yorkers are now going through as the coronavirus takes a heavy toll.

“I feel for people who live in New York and them places who are stuck in apartments,” he said. “That would be tough on me.”

In retirement, Davis and Stewart both avidly hunt and fish. Stewart loves to go camping, care for chickens and has plans to tend to his garden when the weather gets warmer.

Davis now lives alone on 200 acres (about 81 hectares) one county over from the mine site. He's been busy building kennels, caring for his hound dogs and enjoying two grandchildren from his two other sons.

The hurt never goes away. A few days ago Davis went to his mailbox and saw a letter addressed to his late son, Cory.

“I still get them triggers,” Davis said. “As long as I stay busy, I keep my mind occupied. It’s when I sit down is when it hits me. It does every day.”

But he's learned to talk himself out of situations where anxiety takes over. Whether it's the coronavirus or other challenges, “you shouldn’t be running scared,” he said. "I know life is precious.

"At this point, I’ve had a good life. I’m still going to live. I’m not going to hide from it.”