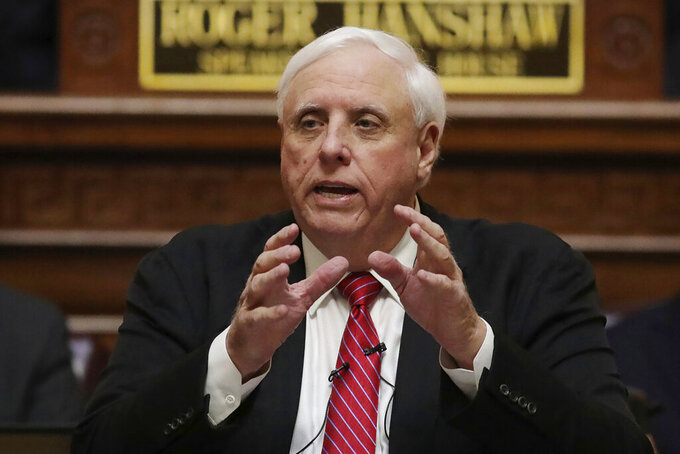 FILE - In this Jan. 8, 2020, file photo, West Virginia Gov. Jim Justice delivers his annual State of the State address in the House Chambers at the state capitol in Charleston, W.Va. Gov. Jim Justice announced Friday, Oct. 9, 2020, that bars around West Virginia University in Morgantown can reopen next Tuesday, a month after images of maskless college students packing bars led them to be shut down. . (AP Photo/Chris Jackson, File)

CHARLESTON, W.Va. (AP) — West Virginia Gov. Jim Justice said he and his staff tested negative for the coronavirus after a staffer in the Capitol building tested positive Friday morning. The attorney general’s office later said the employee believed to have the virus tested negative on Friday evening.

Justice said he was tested for the virus minutes before a noon news conference Friday, where he announced a record high of new cases. The state reported 540 confirmed coronavirus cases over the past 24 hours.

But after testing staff and the individual again Friday evening, “all of our tests came back negative,” Johnson later told the AP.

“The office is taking appropriate precautions that include testing to ensure the safety of not only its employees, but all of those in the Capitol building and the surrounding community,” Johnson had said Friday afternoon after the positive test.

The governor's office declined to say exactly how many people were tested and whether anyone will consider quarantining.

His office said in an evening press release that the West Virginia National Guard administered the tests and that all of the “several members of staff” who got tested were negative.

In line with the nation, West Virginia is hitting new peaks in virus cases. The state also reported seven additional virus-related deaths, bringing the death toll to at least 487. Justice chastised residents for not taking advantage of the state’s free testing sites.

“We set up a testing site and not one person shows up,” Justice said about a recent day at a Wyoming County site. A county with a severe outbreak can get out of school and sports shutdown restrictions if more of its residents get tested and the county’s positivity rate goes down.

Three counties had the state's most severe coronavirus outbreak designation on Friday, marking Marshall, Mineral and Mingo counties as red on a color-coded map. Eight others were marked orange. In-person schooling and athletic competitions are restricted under those two categories.

The West Virginia Supreme Court ruled to allow a soccer tournament to begin as scheduled on Friday morning. A day before, a lower court had ruled to temporarily halt it over coronavirus spread.

Justice said “it sure is getting close” to a point where the state may implement new shutdown measures.