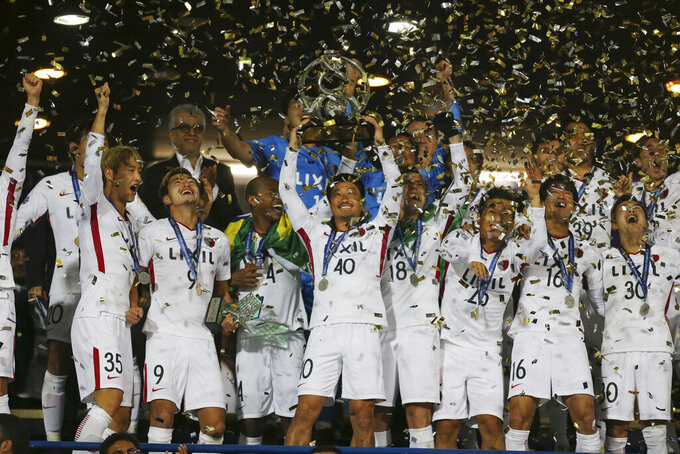 FILE - In this Nov. 10, 2018, file photo, Kashima Antlers' Mitsuo Ogasawara, center, holds up the trophy as he celebrates with teammates after winning the Asian Champions League at the end of their match with Iran's Persepolis the Azadi (freedom) stadium in Tehran, Iran. When the decision was made in 2013 to split the Asian Champions League into east and west geographic zones, it was unthinkable that a team from one half of the continent could book a place in the Grand Final weeks before some clubs on the other side hadn’t started the group stage. Such a lopsided scenario will likely become a reality in 2020. (AP Photo/Vahid Salemi)

When United Arab Emirates club Al Wahda wouldn't travel because its players had the coronavirus, its results were wiped from the Asian Champions League on Monday.

The club was judged to have withdrawn from the competition when it failed to travel to Qatar to resume games in the West Asia tournament bubble, the Asian Football Confederation ruled.

Al Wahda’s players were quarantined in the UAE and unable to travel to Doha as required four days ahead of its first restart game which was scheduled for Monday.

“Al Wahda and the (UAE federation) requested the matches be postponed,” the AFC said. “However, because the preparations were advanced and other teams had arrived, this was not possible.”

Al Wahda had four points from two games before the pandemic stopped the league, but with those removed Al-Ahli took control of the three-team Group A when the Saudi Arabian side beat Al-Shorta of Iraq 1-0 and moved to the top.

Defending champion Al-Hilal of Saudi Arabia, despite having six players sidelined after testing positive for the virus on Saturday and Sunday, defeated Pakhtakor of Uzbekistan 2-1.

“We have absent players but Al-Hilal is a team that always expects to win and we will not use that as an excuse,” Al-Hilal coach Razvan Lucescu said.

Former Juventus and Italy forward Sebastian Giovinco gave Al-Hilal a first-half lead and Eran Derdiyok scored with 20 minutes remaining to level. Hattan Bahebri grabbed the winner after seven minutes of added time to give Al-Hilal three wins out of three in Group B.

“We have distinguished players who have the ability to do well despite the absence of those affected with the virus,” Lucescu added. He has to prepare his team for three more group games in the next nine days.

Qatari team Al-Duhail also had a player test positive for the virus but will still take on Sharjah of the UAE on Tuesday.

Despite the outbreaks, West Asia is scheduled to produce a finalist by Oct. 3 but that victorious team will have to wait until early December to find out who emerges from East Asia to face in the league final.

Last week, the AFC pushed back the east’s resumption from October to Nov. 15.

Three Chinese teams have yet to even start the group stage. The venue to host the four eastern groups, which also feature teams from Australia, Malaysia, South Korea, Thailand and Japan, has yet to be confirmed.