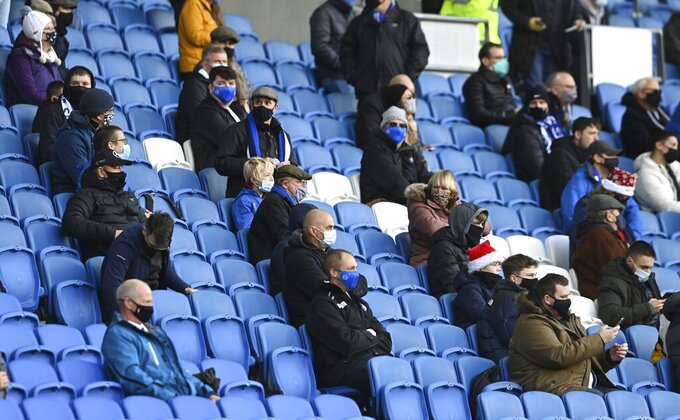 LONDON (AP) — Brighton and Southampton will no longer be allowed to play in front of a crowd due to new coronavirus restrictions, leaving Liverpool and Everton as the only Premier League clubs permitted up to 2,000 spectators.

When limited crowds were allowed back into games three weeks ago for the first time since March, they were allowed at half of the 20 Premier League stadiums. But a spike in COVID-19 cases and a potentially more contagious variant has led to tougher restrictions around southern England — the latest announced by the government on Wednesday placing Brighton and Southampton into tier four curbs.

It came as the English Football Association announced 32 coronavirus positives after tests on 864 players and club staff in the top two women's leagues — almost 4% of those tested. It is the highest weekly figure from the Women's Super League and Championship, and more than in the previous seven weeks combined.

The previous highest number of positives announced by the FA in a single week was 10 team cases detected between Oct. 19-25.

Women's teams are now on a winter break until next month after playing their last matches on Sunday. Chelsea's game against Tottenham was postponed last weekend due to an outbreak within the WSL champion's squad.