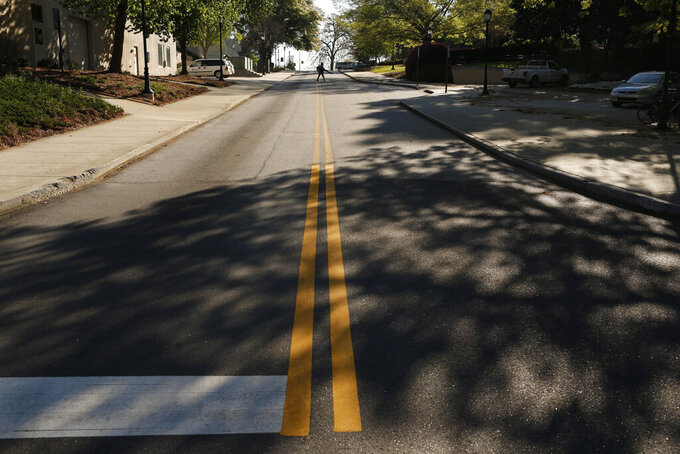 A lone landscaper blows off leaves in the middle of Hooper Street on the empty campus of the University of Georgia, in Athens, Ga, on Thursday, April 2, 2020. UGA moved all classes online for the remainder of spring and summer semesters as well as canceling spring commencement In order to prevent the spread of COVID-19. (Joshua L. Jones/Athens Banner-Herald via AP)

The Georgia Department of Public Health reported that at least 208 people have died from illnesses related to the coronavirus as of Saturday and more than 1,200 have been hospitalized statewide. Total infections confirmed in the state exceeded 6,300.

Gov. Brian Kemp's order that took effect Friday evening allows residents to get outside for exercise, shop for groceries, seek medical help and to keep going to work at jobs deemed “essential.” Businesses including bars, gyms and theaters remain closed and restaurants can only serve takeout or delivery orders. Gatherings of more than 10 people are prohibited.

The Republican governor's action also reversed some tougher restrictions that had been imposed by city and county officials. Parks and beaches that had been closed by local emergency orders, for example, were reopened under Kemp's statewide order.

“Tybee City Council and I are devastated by the sudden directives and do not support his decisions,” Sessions said of the governor in a statement posted on the city's website. “The health of our residents, staff and visitors are being put at risk and we will pursue legal avenues to overturn his reckless mandate.”

Kemp spokeswoman Candice Broce said officers from the state Department of Public Safety and Department of Natural Resources were patrolling Tybee Island roads and beaches to ensure compliance with the governor's order.

“Beachgoers are mostly locals and complying with social distancing orders," Kemp posted on his Twitter account. "We will continue to monitor conditions."

Kemp's shelter-at-home order will be enforced through April 13, and could be extended. Violations are punishable as misdemeanors.

Bibb County Sheriff David Davis told The Telegraph of Macon that his deputies won't be randomly stopping people to question why they're outside their homes. He said his deputies have been told to issue warnings, followed by misdemeanor citations for those who insist on violating the order.

“Just because this order is in effect, it really doesn’t give us the probable cause to stop every single car,” Davis said. "We have to assume that car is going for some essential service unless we see something otherwise.”

For most people, the new coronavirus causes mild or moderate symptoms. For some, especially older adults and people with existing health problems, it can cause severe illness, including pneumonia, and death.

Kemp announced Saturday that efforts are underway to prepare for a surge of new COVID-19 patients. The state has purchased four temporary medical units, with a total of 88 hospital beds, that will be deployed in mid-April to augment hospital space. Units will be sent to Albany, Rome and Atlanta, with a fourth one available as needed, Kemp's office said in a news release. Hospitals in Albany and Snellville in metro Atlanta are also setting up space in previously closed medical facilities that will have more than 200 total additional beds by late May.

Hard-hit Dougherty County in southwest Georgia on Saturday had reported at least 30 deaths, the most of any county in the state.

One Albany woman who's recovering from COVID-19, the disease caused by the virus, urged others not to give up hope. Quiona Slaughter, 31, told WALB-TV she got sick in late March and was hospitalized for a week. She was sent home Thursday and has another full week of being quarantined there.

“I’m perfectly fine," Slaughter said. "I can eat, I can eat a full course meal. I can talk. You know sometimes I get a little out of breath but that’s normal because my lungs are still getting stronger.”

She added: "If you don’t have to go out, please don’t go because you never know who has the virus. You have to stay home because it’s not a joke.”