Virus-delayed school year starts in WVa, online for many 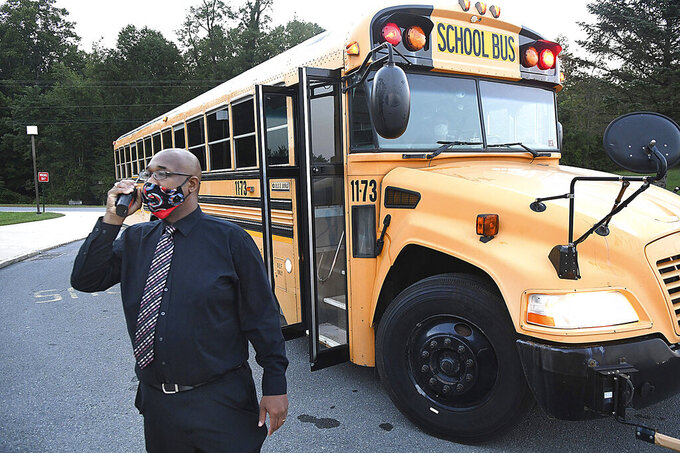 CHARLESTON, W.Va. (AP) — Children returned to classes for the start of the school year throughout West Virginia on Tuesday. In nine of the state's 55 counties, students began the year with remote learning due to the coronavirus pandemic.

The map shows the rate of confirmed community-spread coronavirus cases per 100,000 residents in each county. The categories, in order of increasing severity, are green, yellow, orange and red.

The nine counties must reduce their virus case rates to yellow or green before schools there can conduct in-person learning. Athletic contests in those counties also cannot be held this week.

State schools Superintendent Clayton Burch said his own children were disappointed they could not be in the classroom. He told his youngest son as he and his brothers go out into the public that “they actually play a role in getting back in school: Wear your mask. Get the numbers down so your community is safe so these schools can open.”

In Morgantown, West Virginia University brought an abrupt halt to in-person classes, moving nearly all undergraduate courses online temporarily after a recent uptick in virus cases. Graduate and professional courses will continue to be offered in person.

"If the safety protocols had been followed and large gatherings had not been held by students with reckless disregard of their fellow students and community members, we may not be in this situation," WVU President Gordon Gee said in a letter to students Monday.

Monongalia County, which includes the WVU campus, is the only county in red. The counties in orange Saturday were Fayette, Kanawha, Logan, Mercer, Mingo, Monroe, Putnam and Wayne.

Mercer County has since improved to yellow. If it stays there, in-person classes could resume next week.

Learning was interrupted in another way in Cabell County, where classes were canceled Tuesday at Huntington High School due to a water main break.

The number of active confirmed virus cases in West Virginia reached a record 2,785 on Monday, up 663 cases, or 31%, from a week earlier. There have been at least 250 virus-related deaths.

The virus usually results in only mild to moderate symptoms, but is particularly dangerous for the elderly and people with other health problems.