VIRUS DIARY: The coronavirus came, and she kept on training 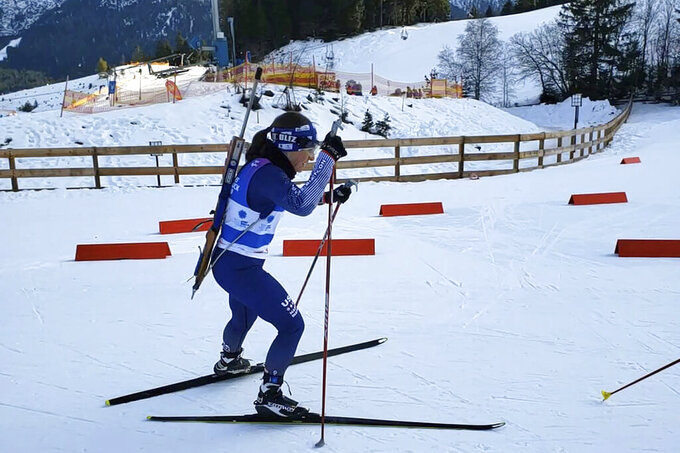 SEATTLE (AP) — This year started with so much promise.

I spent two weeks in January competing in biathlon races in Seefeld, Austria, during the Winter World Masters Games 2020, winning three silver medals and celebrating with 3,000 winter-sport athletes from around the world.

Six weeks later, I was hunched over my laptop at my dining room, keeping track of COVID-19 deaths in the U.S. and afraid to step outside my house.

The swerve from international celebration to home-office isolation was jarring. But being an Associated Press reporter in Seattle, where the earliest coronavirus cases were reported in the United States, gave me a unique front-row seat to a worldwide event.

I’d been training for the Austria trip for years. The Winter World Masters Games are the Olympics for masters athletes – people 35 years and older. It’s held every five years in different locations. Innsbruck2020 hosted competitors in a dozen winter sports.

I started racing biathlon when I moved to Seattle in 2014, after cross-country ski racing for about 15 years. Biathlon combines the physical demands of Nordic skiing with the laser-sharp focus of marksmanship.

We ski loops around a track and stop at the range to shoot at five targets with a specialized .22-caliber biathlon rifle, both in prone and standing positions. I train year-round and race at biathlon sites across the country and Canada, including annual trips to Finland for the master biathlon world championships, where I’ve won five gold medals.

More than 40 biathletes from across the U.S. traveled to Austria for the January races. We flew through international airports, crammed onto trains, ate at restaurants. About 200 biathletes and their supporters jostled for shooting mats at the Seefeld range.

In other words, life was “normal.”

When I returned to the Pacific Northwest, the coronavirus story was growing. I moved to my home office in late February as new cases came in each day and people were dying at a nearby nursing home.

One day, a colleague asked if we were keeping track of coronavirus deaths in each state. The go-to source, the Johns Hopkins University virus page, offered world and U.S. numbers but lacked timely state-by-state counts. So I started a tally for AP.

Seeing the rapid death toll was disturbing. After a time, we began using Johns Hopkins counts for all our stories, and I stopped keeping track. I was sad to let go of that steering wheel, but also a little relieved. I had not taken a day off since the outbreak started and welcomed a chance to clear my head.

Which was what training helped me do. Through this stressful period, I kept my sanity by maintaining my biathlon routine, which includes eight to 18 hours of workouts six days a week.

During a recent work webinar about dealing with stress, a counselor said this: We can’t control outside events, but we can choose how we respond to them. For me, the go-to tool for reacting to anxiety has always been physical activity. This year was no different.

My biathlon racing season had been cut short. They cancelled U.S. Biathlon Nationals in March. It's still unclear what will happen this winter.

But each morning, I head out for a long run or rollerski interval session. Weekend runs and bike rides can last three hours or more. I haven't gone to the shooting range like I normally would this time of year, but I’m staying on track.

I hope next winter will bring more travel and racing. In the meantime, training keeps me sane.

Virus Diary, an occasional feature, showcases the coronavirus pandemic through the eyes of Associated Press journalists around the world. Follow Seattle-based AP reporter Martha Bellisle on Twitter at http://twitter.com/marthabellisle