VIRUS DIARY: Fantasy baseball, when real ball is the fantasy 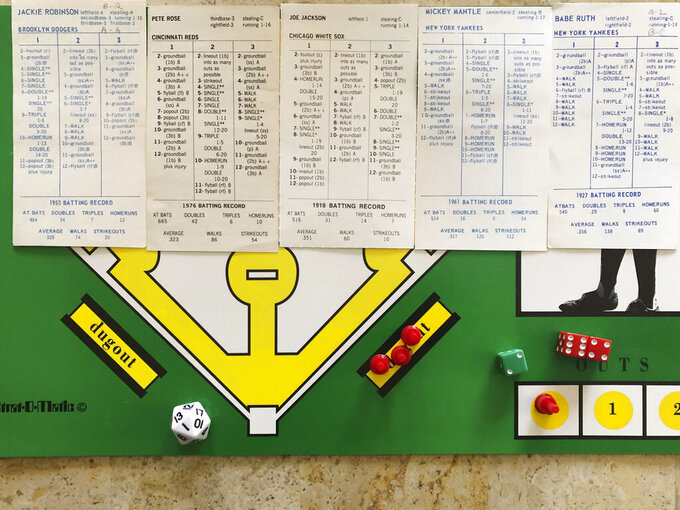 In this April 1, 2020, photo, AP correspondent Dan Sewell in Cincinnati plays in a tournament at home using the Strat-O-Matic baseball board game while self-isolating due to the coronavirus outbreak. With no real baseball being played, fans are getting their fixes with conference call chats, trivia contests and fantasy games. (AP Photo/Dan Sewell)

CINCINNATI (AP) — "People ask me what I do in winter when there is no baseball. I’ll tell you what I do. I stare out the window and wait for spring.” — Rogers Hornsby (1896-1963), baseball Hall of Famer

Updating my brackets, I looked forward to a dream second-round game: the 1919 Chicago White Sox against the 1976 Cincinnati Reds. The two greatest players ever banned because of betting scandals, Shoeless Joe Jackson and Pete Rose, on the same field!

The field is made of cardboard, a game played with dice and statistically accurate cards.

Instead of cleaning out the basement as planned two weeks ago in our self-isolating home, I returned upstairs carrying a box of Strat-O-Matic cards and drew up a March Madness baseball tournament with the best teams of all time.

“The only church that feeds the soul, day in, day out, is the church of baseball.” — Annie Savoy (Susan Sarandon) in “Bull Durham"

Opening Day is a big deal in Cincinnati: eclectic parade, office parties with hot dogs; block parties with live music. But the coronavirus outbreak forced baseball to postpone first games March 26 to no sooner than mid-May.

Right now, there's no watching from lawn chairs the grandkids' games of tee-ball, with kids piling on each other fighting for the ball while a coach windmills his arm to a confused runner. There's no coach-pitch, where dads learn the shame of accidentally striking out their own child. No Little League, where you start seeing slick fielding and savvy batting.

“This field, this game, is a part of our past, Ray. It reminds us of all that once was good, and that could be again.” — Terence Mann (James Earl Jones) to Ray Kinsella (Kevin Costner) in “Field of Dreams"

We're trying to get our baseball fixes.

“Is this heaven?” — Shoeless Joe (Ray Liotta) in “Field of Dreams”

Baseball video games are fine, but this board game I first played at age 11 still spurs flights of imagination: Rose in his jut-jawed prime and a shyly smiling Shoeless Joe Jackson hanging around the batting cage on a sunny afternoon, talking hitting.

Jackson and pitcher Eddie Cicotte, also banned after the 1919 “Black Sox” scandal, starred in a play-in round win over the 1994 Montreal Expos. I'm hoping to get to the second round this weekend.

When this crisis has ended and baseball resumes, it will lift spirits that need it, as the 2001 Yankees did for New York after 9/11 with a thrilling postseason run that fell one game short. And we will feel comforted as fans did in 1946 when Ted Williams, Joe DiMaggio and Stan Musial returned to the field after World War II military service.

“One guy died and he went to heaven, and he came back down and he told his buddy, 'You know, I’ve got good news and bad news.' ... ‘So what’s the good news?' ‘Well, there’s baseball in heaven.' ‘What’s the bad news?' ‘You’re pitching next Thursday.'" — Rose, telling a favorite joke on ESPN.

“Virus Diary,” an occasional feature, will showcase the coronavirus saga through the eyes of Associated Press journalists around the world. Follow Dan Sewell, The AP's Cincinnati correspondent, on Twitter at https://twitter.com/dansewell