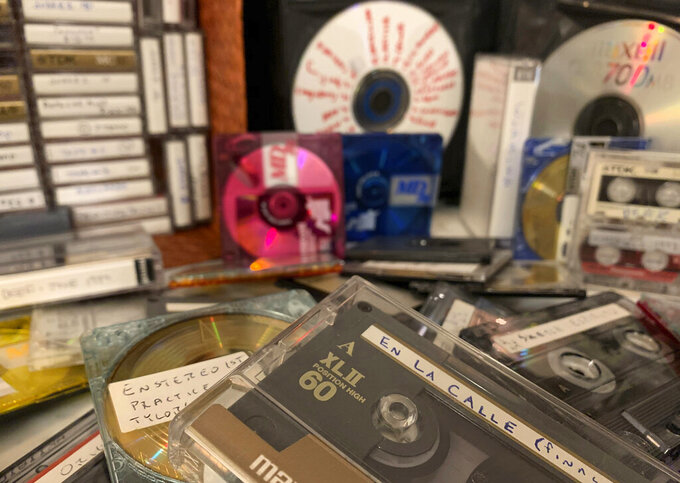 NEW YORK (AP) — Outside, the soundtrack of sirens wailed, each another death blow to the city that had nurtured my development as a musician for so long. But from inside my life on lockdown, an unexpected reconnection to my catalog of sounds was handing me hope for New York's future.

When I moved here in autumn 1996, as I learned to engineer and produce music, I started recording everything from found sounds to late-night jam sessions to my own dabbling. And I'd saved everything.

In January, my longtime musical collaborator suggested we catalog, curate and upload my decades-rich audio archive to the online music site Bandcamp. Under normal circumstances I would’ve said no; I'd considered those recordings unfinished, meant for private enjoyment and reflection.

But within the context of a pandemic, I pushed aside insecurity and instead saw opportunity.

And so the excavation of long-forgotten boxes began. From their depths came microcassettes. MiniDiscs. CDs. Hard drives. What emerged was a historical document shaped by my personal and professional journey in the city.

To a wide-eyed 23-year-old from Las Cruces, New Mexico, New York offered unexpected adventures and limitless possibilities. Inspiration was always around the corner.

One night I ended up in the basement of the fabled CBGB, rubbing elbows with Iggy Pop, Joey Ramone and Neil Young while watching Sonic Youth perform a private set. Another evening, I landed in a makeshift studio, deploying my nascent recording skills for a session with Gordon Gano of the Violent Femmes.

New York’s serendipitous moments have long been fueled by the streets and subway tunnels, its arteries. These great equalizers compel coexistence, pushing inhabitants into its daily motion, fabric and swell. What is left when the people — the hemoglobin in this multicultural organism — disappear? Does New York die?

I decided to keep my city alive by revisiting my relationship with it one audio file at a time. Each box I opened yielded a different medium, a different state of mind.

My first instrument was the microcassette recorder. I'd play it like a turntablist, jerking the forward/reverse switch to “scratch” the sounds I’d collect — from a radiator to a frozen lake to a revving engine. I found recordings of interviews I’d conducted with artists including Mike Patton, Marc Ribot and Latin Playboys.

A synergy was taking place, I realize now. Journalism was granting me access to master classes on songwriting and production; I would use what I’d learned to feed myself and The Associated Press, where I became de facto in-house composer and created music tracks for our journalism.

Sitting in my studio surrounded by artifacts, I pieced together a memoir from lo-fi samples and Alan Lomax-inspired field recordings: Mexican songs from family singalongs. Church hymns sung by relatives. Rancheras played by prison inmates in Juarez, Mexico, where I was researching a documentary.

As lockdown days dragged on, I dug deeper. Next up: nested folders inside my first laptop, the Apple Powerbook G3, the model used by Sarah Jessica Parker’ in “Sex and the City.” While Carrie Bradshaw was recording observations on romance, I was sampling, layering and manipulating New York's sounds in ways unimaginable prior to 1998.

The laptop would become my mobile recording studio — and, in the mid-2000s, my ticket into music venues and apartments of the musicians who appeared on my AP podcast, “One Mic, One Song.”

As I listened to the episode featuring Lila Downs, who displayed her range with a jaw-dropping acapella rendition of “La Noche De Mi Mal,” I thought of my late parents, who grew up listening to its songwriter, Jose Alfredo Jimenez.

Their voices, prominent throughout my archive, were fresh in my mind alongside the countless other people who have participated in — and defined — the soundtrack of my life in New York City.

During the past four months, we have each sought refuge in different ways. I found mine. I have reframed my New York narrative, moment by unearthed moment. Along the way, I've discovered a years-long song that I never realized I was writing.

Virus Diary, an occasional feature, showcases the coronavirus pandemic through the eyes of AP journalists around the world. Jaime Holguin is AP's director of original programming. Check out his audio archive at https://en-stereo.bandcamp.com/ and follow him on Twitter at http://twitter.com/enstereo