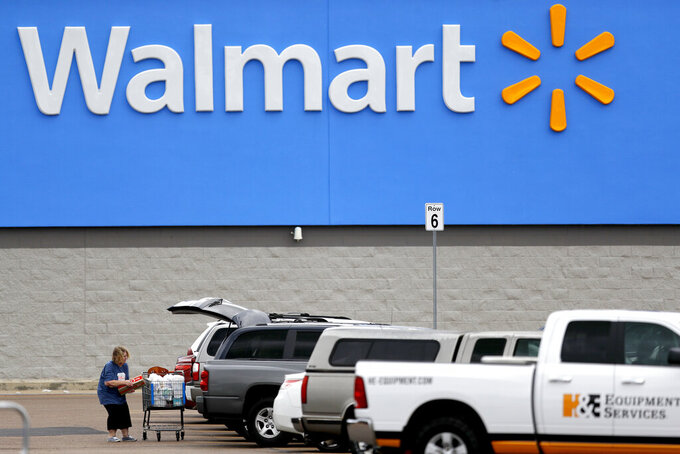 FILE - In this March 31, 2020 file photo, a woman pulls groceries from a cart to her vehicle outside of a Walmart store in Pearl, Miss. Walmart will require customers to wear face coverings at all of its namesake and Sam's Club stores. The company said the policy will go into effect on Monday, July 20, 2020 to allow time to inform stores and customers. (AP Photo/Julio Cortez, File)

NEW YORK (AP) — Americans turned to Walmart and Home Depot for supplies and do-it-yourself projects as they stayed close to home at a time when new cases of virus surged, resulting in soaring sales for their fiscal second quarter.

Walmart's online sales nearly doubled in the fiscal second quarter, helped by an expansion of its online delivery services. Sales at U.S. locations opened at least a year jumped 9.3%, the company reported Tuesday. With customers not going out to eat as much, they're cooking at home, spurring sales of groceries. They're also buying items to set up their home office or improve their outdoor area, store executives said.

Home Depot, the nation's largest home improvement chain, reported on Tuesday a 23.4% increase in sales at stores opened at least a year globally, helped by a frenzied pace of do-it-yourself projects. That’s almost twice the 12.2% increase that industry analysts had projected.

However, department store chain Kohl’s reported an adjusted loss that was smaller than expected and revenue fell 23% during the fiscal second quarter. The results came as Kohl’s worked to reopen its 1,100 stores after temporarily closing them all during the start of the pandemic.

“Some parts of retailing are thriving; some parts are being devastated," said Neil Saunders, managing director of GlobalData Retail. “It's demonstrating a dramatic shift of how and where shoppers are spending their money. People's lives are revolving around the home. That means food, home improvement and comfortable clothes."

Consumers had already begun to rely on Walmart, Home Depot and other essential retailers like Target and Amazon as lifelines for necessities during the start of the pandemic. Walmart’s online sales, for example, rose 74% for the fiscal first quarter. That trend accelerated to 97% in the second quarter and broadened the gap between traditional retailers, many of them anchor stores at the mall, and big box operators like Walmart and Target.

Kohl's CEO Michelle Gass told reporters on a call Wednesday that the chain, based in Menomonee, Wisconsin, should benefit from mostly being located at strip centers. It's also looking to capture sales from rivals that are closing. She also says that its home furnishings are resonating even more as shoppers are focusing on their home. During the second quarter, 50% of online sales were fulfilled in stores.

“We will be a beneficiary of consumers adopting more casual lifestyles and shopping more digitally," Gass told analysts on a call.

Home Depot and Walmart are setting a high bar for the rest of the retailers and are among the few bright spots in an industry mostly battered by the financial fallout of the pandemic. Target, Lowe's, TJX Cos. and Victoria's Secret parent are slated to report their earnings Wednesday.

Net income for Walmart Inc., based in Bentonville, Arkansas, reached $6.48 billion in the quarter, or $2.27 per share. Earnings, adjusted for one-time gains and costs, were $1.56 per share, easily outpacing Wall Street projections of $1.22, according to a survey by Zacks Investment Research.

However, surging sales took place as the U.S. rolled out massive assistance plans for the millions who had lost jobs or who were furloughed.

The $600-a-week federal unemployment check that had been sent to roughly 28 million laid-off workers is gone. And a $1,200 stimulus check that was sent to many Americans in April and May appears to be a thing of the past. Negotiations in Congress on a new economic relief package have collapsed and there is no evidence of an agreement on more aid, at least in the near future.

That had been a concern for analysts trying to predict how that will influence where Americans shop. Already, Walmart is seeing the expired benefits having an impact on its business.

“As the benefits from stimulus wane towards the end of the quarter, we saw comp sales settle into a more normal range,” said CEO Doug McMillon. He told analysts on a call that another round of stimulus money is necessary for small businesses.