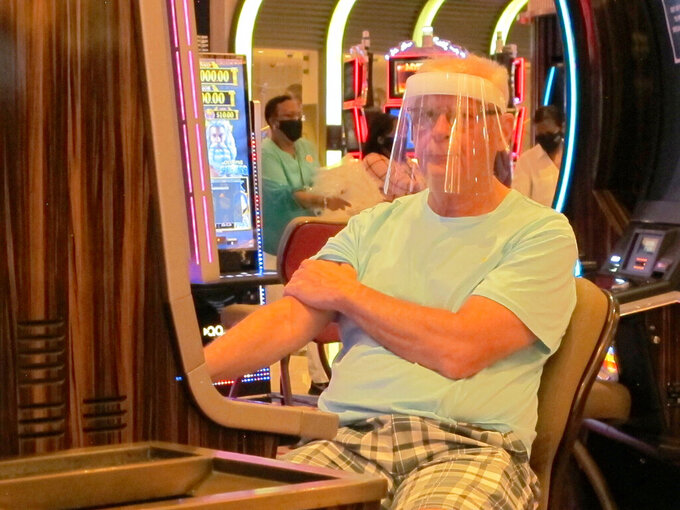 A gambler wears a face shield while playing a slot machine at the Hard Rock casino in Atlantic City N.J. on July 2, 2020, the first day it was allowed to reopen during the coronavirus pandemic. Figures released on April 9, 2021 show Atlantic City's nine casinos collectively saw their gross operating profits decline by more than 80% in 2020.(AP Photo/Wayne Parry)

But despite those dismal numbers, seven of the nine casinos still managed to eke out a profit, no matter how small, in 2020.

The state Division of Gaming Enforcement reported the nine casinos collectively posted $117.5 million in gross operating profits in 2020. That was down from nearly $594 million a year earlier, before the pandemic forced casinos to close for 3 1/2 months, and limited their operations even after reopening.

Gross operating profit reflects earnings before interest, taxes, depreciation and other expenses, and is a widely accepted measure of profitability in the Atlantic City casino industry.

"Atlantic City and its casinos endured their most challenging year in history," said James Plousis, chair of the New Jersey Casino Control Commission. Even after being allowed to reopen in July, the casinos' earnings were limited by travel restrictions, limited amenities, and canceled entertainment, he added.

“Yet, through responsible management, the casinos proved that in-person gaming could happen safely,” Plousis said. “As tourists return to the shore, they can have every confidence Atlantic City is safe for the summer.”

The Ocean Casino Resort posted the largest operating profit at $21.8 million, up from $6.7 million in 2019. Its owners announced this week that the Ilitch family of Detroit, which owns the Little Caesars pizza chain, pro baseball and hockey teams and a Detroit casino, is buying half of the Ocean casino.

Ocean was the only Atlantic City casino to increase its profits during the pandemic year.

“Despite 2020’s extraordinary challenges, Ocean showed continued growth, emerging as an industry leader in gross gaming revenue,” Terry Glebocki, Ocean's CEO, said in a statement. “Thanks to our team’s hard work and determination in the months before and after our temporary closure due to the global pandemic, Ocean had a successful year. As restrictions ease and we reopen additional areas of our business, I’m optimistic we’ll continue to see gaming growth throughout 2021."

Resorts had an operating loss of $10.5 million, compared to a profit of $17.6 million in 2019. Resorts is in the process of extending its management agreement with the Mohegan tribe in Connecticut to manage its Atlantic City casino operations.

Among internet-only entities, Resorts Digital had an operating profit of over $21 million, up from $8.5 million in 2019. Caesars Interactive Entertainment-NJ had a profit of nearly $20 million, up more than 45%, and Golden Nugget Online Gaming, which was spun off last year, showed an $18.6 million profit.

For the fourth quarter of 2020, whose results also were released Friday, Atlantic City's casinos reported a collective gross operating profit of $57.8 million, down over 53% from 2019.

Ocean also had the most expensive average hotel room rate in 2020 at nearly $202. The Borgata was a distant second at $160.

Resorts had the lowest average room rate at $101, followed by Hard Rock at $112.

Ocean also had the highest occupancy rate in 2020 at 84%. The city as a whole averaged nearly 62% occupancy.