Virus makes for one of Europe's loneliest WWI remembrances 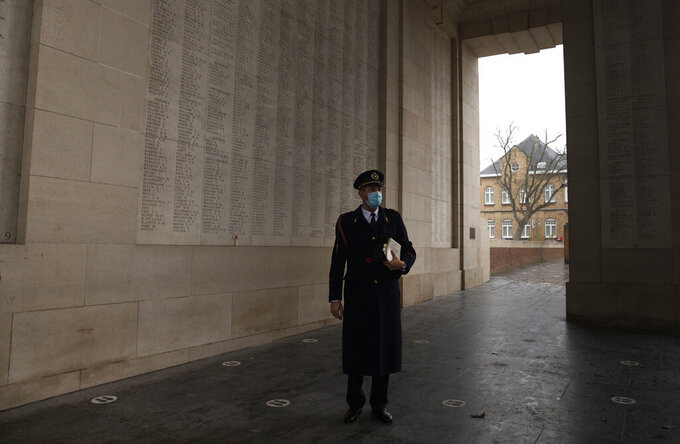 Last Post bugler Tonny Desodt stands on social distancing markers at the Menin Gate Memorial to the Missing prior to an Armistice Day ceremony in Ypres, Belgium, Wednesday, Nov. 11, 2020. In a town usually crowded with visitors, coronavirus restrictions prevented the general public from attending a ceremony under the Menin Gate, with even dignitary attendance reduced to a minimum. (AP Photo/Virginia Mayo)

YPRES, Belgium (AP) — When a dawn fog lifted over countless World War I battlefields, cemeteries and monuments in Belgium and France Wednesday, the pandemic ensured that the remembrance of the millions killed in the 1914-1918 conflict was one of the loneliest ever.

One WWI ceremony outside Europe fell victim to current-day violence when an improvised explosive device slightly injured 3 people at a gathering of French, American, British, Italian and Greek officials in the Saudi city of Jiddah.

Under the Menin Gate in western Belgium's Ypres, at the heart of the blood-drenched Flanders Fields, usually thousands gather to pay tribute. On Wednesday, only half a dozen were allowed at the monument carved with the names of more than 54,000 fallen British and Commonwealth soldiers who have no known grave.

It made the mournful melody of the “Last Post" played by lone bugler Tonny Desodt even more poignant.

“We don't do this for the crowds, even though their appreciation is welcome. We primarily do this for the names chiseled on the walls," Desodt told VRT network. The circumstances also hit home for him, since his wife is a nurse at a COVID-19 ward at a local hospital.

The nearby Flanders Field American Cemetery and the Commonwealth Tyne Cot were all closed due to pandemic precautions.

Somber remembrances were held from London to Paris and at many places along the former Western Front, where Ypres saw some of the bloodiest battles in a war remembered for brutal trench warfare and the first use of chemical weapons.

WWI pitted the armies of France, the British empire, Russia and the U.S. against a German-led coalition that included the Austro-Hungarian and Ottoman empires. Almost 10 million soldiers died, sometimes tens of thousands on a single day.

In Paris, President Emmanuel Macron paid tribute to wartime Prime Minister Georges Clemenceau at a statue in his honor, then laid a wreath of red, white and blue flowers representing the tricolor French flag at the Tomb of the Unknown Soldier, and re-ignited the flame.

Military musicians played the French version of “Taps,” and after a minute of solemn silence a military choir sang the Marseillaise, a capella. The public was kept away from the ceremony and the military presence was sharply reduced.

In London, Armistice Day marked the 100th anniversary of the burial of the Unknown Warrior in Westminster Abbey. Wearing masks, Prince Charles and his wife, Camilla, led the U.K. in observing a two-minute silence. The heir to the throne laid a wreath of red roses and bay leaves — identical to one presented by his great-grandfather King George V in 1920.

The tomb holds the remains of an unidentified U.K. soldier that were reburied at the Abbey to honor the sacrifice of the 886,000 British personnel who died during the war.

Veteran groups expressed regret that COVID-19 restrictions limited the size of this year’s ceremonies. Vivien Foster, president of the Merchant Navy Association, said she had been unable to lay her wreath at the Cenotaph on Remembrance Sunday.

“Despite that, it was totally important that we paid respects and marked the 100-year anniversary," the 74-year-old said. “I always get very tearful and emotional.”