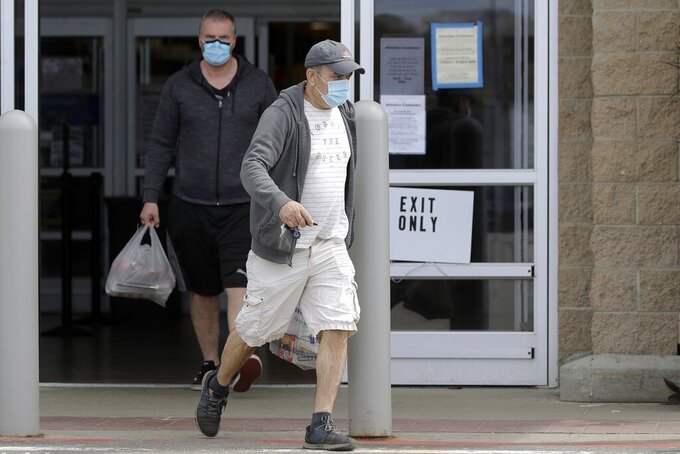 Men wearing protective masks during the coronavirus pandemic exit a Walmart, Wednesday, May 6, 2020, in Walpole, Mass. An executive order signed the previous week by Gov. Charlie Baker took effect Wednesday mandating the use of masks when individuals are not able to socially distance themselves from others. (AP Photo/Steven Senne)

An executive order signed by Gov. Charlie Baker last week took effect Wednesday mandating the use of masks when individuals aren't able to socially distance from others.

Under the order, masks must be worn in grocery stores and pharmacies, on public transit and in cabs and ride-hailing services. The order also lets store owners deny entry to anyone not wearing a mask.

Those who refuse could face fines as high as $300.

Children under 2 are exempt, as are those with certain medical conditions.

The use of masks is key to help slow the spread of the coronavirus, Baker said.

“It’s clear this virus is highly contagious and can be spread person to person without symptoms,” the Republican said at a press conference.

The order defines a facial covering as anything that covers the nose and mouth, including masks, scarfs or bandannas. Medical-grade face masks should be reserved for medical workers, Baker said.

Massachusetts recorded another 208 confirmed COVID-19-related deaths on Wednesday, bringing to 4,420 the total number of deaths recorded in the state since the pandemic’s start.

The total number of confirmed cases of COVID-19 in Massachusetts surpassed 72,000 on Wednesday after the state reported an additional 1,754 individuals who tested positive for the disease caused by the coronavirus.

The number of COVID-19 patients in intensive care units now stands at 922, while the number of people hospitalized with COVID-19 is more than 3,500.

The number of deaths at long-term care facilities stands at 2,653 — or 60% of all COVID-19-related deaths in the state.

Voters would have more options to cast ballots under legislation proposed by Secretary of the Commonwealth William Galvin.

Under the proposal, Massachusetts voters could choose to vote by mail in the Sept. 1 primary and the Nov. 3 general election.

The Democrat is also asking lawmakers to let election officials mail early ballots as soon as ballots are ready. Current law limits the availability of mail-in ballots to a two-week early voting period.

Under existing law, early ballots can only be returned by mail or in person by the voter. Galvin’s plan would let voters to return ballots at an official drop box or ask a family member to deliver the ballot by hand.

Lawmakers used the session — which allowed then to debate and vote remotely — to approve a bill filed by Republican Gov. Charlie Baker aimed at authorizing state borrowing during the ongoing COVID-19 public health emergency.

The bill now heads to the Massachusetts Senate.

The Boston Pops Orchestra has released a musical tribute to health care workers, first responders, supermarket clerks and other critical personnel on the front lines of the coronavirus pandemic.

The performance of “Summon the Heroes” released Tuesday was composed by John Williams for the 1996 Olympic Games and includes an introduction from conductor Keith Lockhart, as well Williams himself, recorded at his home studio in Los Angeles.

The virtual performance includes 78 musicians playing from their living rooms, kitchens, basements and bedrooms. A recording engineer and a video engineer edited the piece from their homes.

Williams compared workers on the front lines of the pandemic to the athletes for whom the piece was composed.

Four F-15s from the 104th Fighter Wing based at Barnes Air National Guard Base in Westfield conducted a flyover of several Massachusetts hospitals and medical facilities on Wednesday to pay tribute to health care workers.

“Air Force Salutes flyovers are a way for the U.S. Air Force to show appreciation to the thousands of heroes on the front lines and all our brave Massachusetts neighbors battling and supporting the COVID-19 response,” the 104th Fighter Wing wrote on its Facebook page.

The stores in Abington and Avon were closed Wednesday so employees can be tested for the disease and the facilities can be cleaned.

A Worcester Walmart was closed last week after dozens of workers tested positive, but has since reopened.

The Quincy Walmart closed this week after one one employee died of COVID-19 and several others tested positive.