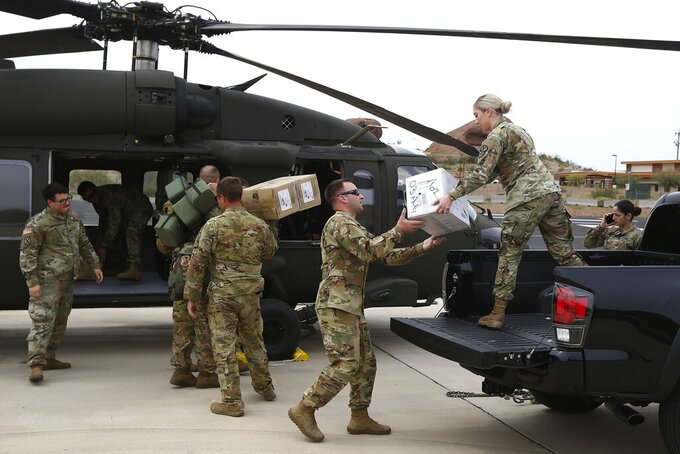 FILE - In this March 31, 2020, file photo, members of an Arizona National Guard unit pause while loading a helicopter with medical supplies to be taken to the remote Navajo Nation town of Kayenta in Phoenix. The coronavirus pandemic was Arizona's top news story of the year. The disease disrupted the economy, schools, government and the lives of nearly every state resident. Gov. Doug Ducey was forced to shut down schools in March and then much of the economy in an effort to slow the virus' spread. Ducey eased restrictions in mid-May and watched as the virus surged across the state, starting with massive numbers of infections on the Navajo Nation. (AP Photo/Ross D. Franklin, File)

PHOENIX (AP) — What began as a single case of a new coronavirus infecting someone affiliated with Arizona State University on Jan. 26 turned into a vast outbreak afflicting hundreds of thousands of Arizonans. As the end of the year approached, the virus had killed more than 8,000 people in the state.

The coronavirus pandemic was Arizona’s top news story of the year.

The disease disrupted the economy, schools, government and the lives of nearly every state resident. Gov. Doug Ducey was forced to shut down schools in March and then much of the economy in an effort to slow the virus’ spread. Ducey eased restrictions in mid-May and watched as the virus surged across the state. By that time, the Navajo Nation had massive numbers of infections.

The entire state became a national hotspot for the virus in June. The Republican governor, long resistant to reimposing restrictions, finally closed nightclubs, and let cities and counties require masks, which slowed the virus' spread. Meanwhile, the staggering death toll steadily rose, hitting 1,000 on June 5; 2,000 on July 9; 3,000 on July 23; and 4,000 on Aug. 9.

Schools reopened in August, and the state appeared set for a prolonged fight against the pandemic as business closure orders eased. Pressure grew for Ducey to completely reopen the economy. As September’s relative lull passed, October saw a rise in cases and, by mid-December, the state was breaking new records for daily case counts, hospitalizations and deaths.

The death toll days ahead of Christmas topped 8,000, with the number of cases approaching 500,000. As newly developed vaccines began trickling into the state in mid-December, virus experts said they expected Arizona’s hospitals to fill up by Christmas and the virus to continue raging for months to come.

Voters choose a Democrat for president for only the second time since the 1940s and sent a second Democratic U.S. senator to Washington in a historic shift that shows the state no longer is a Republican stronghold. President-elect Joe Biden’s slim victory came after a decade of speculation that the state’s changing demographics and influx of new residents would chip away at the GOP’s dominance. Biden won Arizona’s 11 electoral votes despite Republican efforts to challenge his victory in court. Meanwhile, former astronaut Mark Kelly defeated Republican Sen. Martha McSally to become Arizona’s second Democratic senator. Arizona hasn’t had two Democrats in the U.S. Senate since Earnest McFarland lost his reelection bid in 1952.

Arizona voters approved the only two initiatives that managed to make the ballot in a pandemic-affected election year — recreational marijuana and a new tax on high-earning residents to boost school funding. Approval of the marijuana measure, Proposition 207, came four years after voters narrowly defeated a recreational pot legalization proposal. Arizona Gov. Doug Ducey and fellow Republicans in the Legislature had refused to change Arizona’s tough marijuana laws. And the passage of Proposition 208, which levies a 3.5% income tax on individuals' income over $250,000 a year and on couples' income over $500,000, also was a rebuke by voters of Ducey and GOP lawmakers who have been criticized for not adequately funding K-12 schools.

Tens of thousands of Arizonans protested racial injustice following the May 25 death of George Floyd after a Minneapolis police officer pressed his knee on Floyd's neck. The protests were mainly peaceful, but a Scottsdale mall was targeted by rioters who broke store windows and stole goods. Damage to public buildings in downtown Phoenix in the early days of the protests led Gov. Doug Ducey to impose a curfew and call out the National Guard. The protests slowly ebbed but calls for police and criminal justice reforms continue in Arizona and across the nation.

Former Maricopa County Assessor Paul Peterson pleaded guilty in three states to running an illegal adoption scheme that involved women he flew to the U.S. from the Marshall Islands. Peterson was sentenced in federal court in Arkansas on Dec. 1 to more than six years in prison and faces sentencing for his admitted crimes in Arizona and Utah next month. Peterson admitted illegally paying at least 70 pregnant women to come to the U.S. and give up their children for adoptions he arranged.

Jane Hull, the first woman elected governor of Arizona and part of the “Fab Five” celebrated as the first all-female elected state executive branch leadership group, died April 16 at age 84. Hull also was the first female speaker of the Arizona House and was serving as secretary of state in 1997 when her predecessor as governor stepped down following a fraud conviction. She won a full term in 1998. Former Gov. Jan Brewer praised Hull for taking on everything she did “full strength” and making sure it was “done diligently and done right.” Hull died of natural causes within hours of the death of her husband, Dr. Terry Hull.

Gov. Doug Ducey abruptly pulled a proposal to put a constitutional amendment on the ballot banning sanctuary cities on Feb. 21 amid political blowback and pressure from the business community. The governor’s plan was a key part of his 2020 agenda. He announced it in January's state of the state address, but it fell victim to real-world politics and warnings from Democrats about the return “to one of the darkest years in Arizona history,” a reference to the passage in 2010 of the tough-on-immigrants law known as SB1070. Arizona cities are already barred under state law from enacting policies giving sanctuary to immigrants without legal status in the country.

The Trump administration was racing in its final month to complete more miles of border wall in southern Arizona that environmental advocates say has caused vast damage, closed off eons-old wildlife corridors and forever scarred the landscape as mountaintops are blasted away to carve a path for the barrier. The Trump administration says it’s completed 430 miles (692 kilometers) of the $15 billion wall along the U.S.-Mexico border and promises to reach 450 miles (725 kilometers) by year’s end.

NAVAJO MAN EXECUTED The only Native American on federal death row was executed Aug. 26 despite objections from Navajo Nation leaders who urged President Donald Trump to halt it on grounds that it would violate tribal culture and sovereignty. The Navajo Nation has not opted in to the federal death penalty, but the federal government used a loophole to make Lezmond Mitchell eligible for the punishment. The Navajo man killed a 9-year-old and her grandmother nearly 20 years ago on the Arizona portion of the reservation. In a twist, most of the victims' family supported the execution but some had objected early in the case.

A Gila County couple whose two children and a niece drowned when they tried to cross a flood-swollen creek on Thanksgiving weekend in 2019 was charged on April 1 with manslaughter and child abuse. They have pleaded not guilty. The tragedy that struck the Rawlings family spurred efforts in the Arizona Legislature to fund a bridge across Tonto Creek, but those efforts were thwarted when the pandemic prompted the Legislature to adjourn early. However, the federal government in September awarded the county $21 million for the bridge.