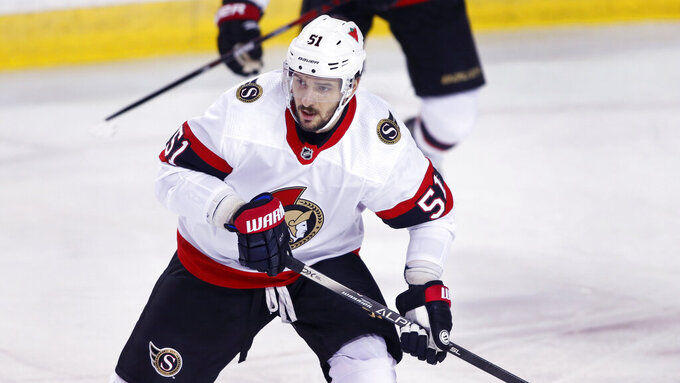 Ottawa Senators' Artem Anisimov, from Russia, during an NHL hockey game, Sunday, March 7, 2021, in Calgary, Canada. Former NHL forward Artem Anisimov is out of isolation after testing negative for the coronavirus and has rejoined the Russian team ahead of the Beijing Olympics, the country’s hockey federation said Thursday, Jan. 27, 2022. (AP Photo/Larry MacDougal)

“It's an extreme situation,” Andersen said from the team's training camp in the Italian Alpine resort of Seiser Alm. “We have to limit the damage as best we can.”

Hegstad Kruger won gold in the 30-kilometer skiathlon race and silver in the 15K event at the 2018 Pyeongchang Olympics, where he also helped Norway win the men's relay.

The entire men’s team has been in isolation in Seiser Alm after head coach Arild Monsen tested positive for COVID-19 after returning to Norway on Monday. The team is planning to fly back to Norway on Sunday and then leave for Beijing on Monday, and it was still unclear whether Hegstad Kruger and Weng will be able to join them later.

People who have recently been infected with the virus are required to submit five negative tests to enter China for the Olympics, which start on Feb. 4.

Earlier Thursday, the Russian hockey federation said former NHL forward Artem Anisimov is out of isolation after testing negative for the coronavirus and has rejoined its Olympic team.

Anisimov has the most NHL experience of any player on the Russian roster with 771 regular-season games played for four teams across 13 seasons, most recently for the Ottawa Senators in 2020-21.

The federation first reported he was positive for the virus late Wednesday in a statement to state news agency Tass, saying he had been replaced on the 25-man roster by Vladimir Tkachev and moved to the taxi squad.

“Artem Anisimov has provided a negative test and spent the required time in quarantine at Novogorsk (training base) and joined up with the team today,” team manager Ilya Kovalchuk said on the federation website Thursday.

The Russians are the defending champions after winning gold in Pyeongchang four years ago. They open the tournament Feb. 9 against Switzerland, and they also face the Czech Republic and Denmark in group play.

There was no information on when Anisimov tested positive or how long he spent in isolation.

There have been five reported virus cases among Russian Olympic athletes this week, with one in figure skating, one in skeleton and two on the same bobsled crew.