Virus patients at one Israeli hospital are not dying alone 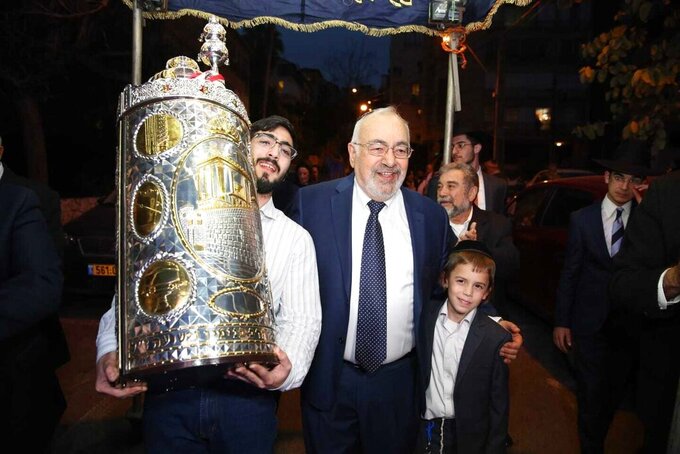 JERUSALEM (AP) — Elisheva Stern wasn't ready to say goodbye to her ailing father, who was succumbing to the coronavirus in an Israeli hospital.

But knowing countless others around the world are not given the chance to say their last farewells to sick relatives, she decided to enter the virus ward and be by her father's bedside, even if only for a brief moment, before he died.

Stern's father, Simha Benshai, 75, died at Tel Aviv's Sourasky Medical Center, which offers the next of kin of dying coronavirus patients the rare opportunity to say goodbye in person.

“None of us want to say bye to the people who we love. But I’m actually happy that they gave me the opportunity to say bye to my father,” said Stern. “I was able to see him and to tell him I’m sorry and I love him."

The practice is in contrast to many hospitals around the world that don't allow final family visits as a precaution against spreading the highly contagious virus. That leaves patients to die alone and forces families to grieve from afar.

“The stories of patients dying alone are horrifying,” said Roni Gamzu, the hospital’s chief executive. “This is our moral duty as medical staff and as human beings. No one shall be allowed to die alone."

The hospital provides immediate next of kin who want to visit a patient with head-to-toe protective wear — gear in demand around the world and often reserved for health care workers — and allows them about 15 minutes to say goodbye. It then assists them in removing the mask, cap, robe, gloves and boots with the utmost caution needed to prevent infection.

Elsewhere, family and friends are bidding tortuous goodbyes remotely, often with the help of hospital workers entrusted to speak the families' final words, or supplying their phones as a bridge to communicate with the virus-stricken relative.

The issue has gripped health care workers around the world.

“Families beg to see their loved ones before they die. A seemingly simple request, which in other times would be encouraged, has become an ethical and health care dilemma,” a group of medical residents from the Detroit area wrote this week in the New England Medical Journal, calling for creative solutions to address the problem.

The virus has infected over 2 million people worldwide and has killed more than 140,000. It causes mild to moderate flu-like symptoms in most patients, who recover within a few weeks. But it is highly contagious and can cause severe illness or death, particularly in older people or those with underlying health problems.

Unlike epicenters like New York or Italy, Israel's outbreak has so far seen manageable numbers of seriously ill patients. The country has more than 13,000 coronavirus cases, among them 158 deaths. Hospitals are not deluged with patients, meaning Sourasky is likely not under as much pressure as other facilities in virus hotbeds and can spare the time and protective gear for the final encounters.

Four families have so far agreed to enter the coronavirus ward in the two weeks since the hospital's project began.

Dror Maor visited his dying mother-in-law at the hospital recently. Entering the hospital room in full protective gear, he saw Segula Yanai, 81, who was sedated and breathing through a ventilator and flanked by other patients in similar condition. He recited a Jewish prayer and psalms at her bedside.

“Despite the difficult scene, I felt my mother-in-law's presence and I believe that she felt mine. It was an act of devotion that I am happy to have carried out," he said.