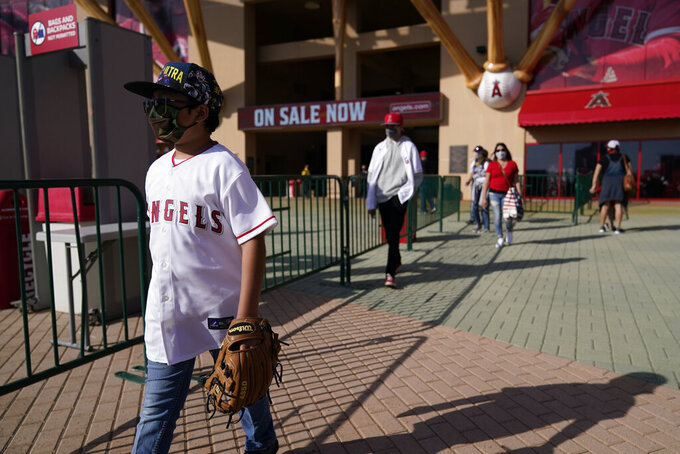 Fans leave Angel Stadium when a baseball game between the Minnesota Twins and the Los Angeles Angels was postponed Saturday, April 17, 2021, in Anaheim, Calif. MLB said the game was postponed to allow for continued COVID-19 testing and contact tracing involving members of the Twins organization. (AP Photo/Ashley Landis)

ANAHEIM, Calif. (AP) — The Minnesota Twins will make up a pair of virus-prompted postponements against the Los Angeles Angels as a doubleheader on May 20, which was originally an off day for both teams.

Major League Baseball announced on Tuesday the rescheduling of games from April 17 and 18. The Twins lost 10-3 to the Angels on April 16 at Angel Stadium before being forced to pause when their total of positive tests reached four. In all, five Minnesota players went on the COVID-19 injured list.

The Twins also had their April 19 game at Oakland postponed and made it up as a doubleheader against the Athletics the following day.

With only one scheduled trip to Southern California for the Twins, finding a practical way to make up the games was difficult. They'll now have 17 games in 16 days, with a flight from Minnesota to Anaheim for the traditional doubleheader that starts in the afternoon on May 20. They'll travel to Cleveland after that for a three-game series beginning on May 21.

The doubleheader is in the middle of an eight-game homestand for the Angels.