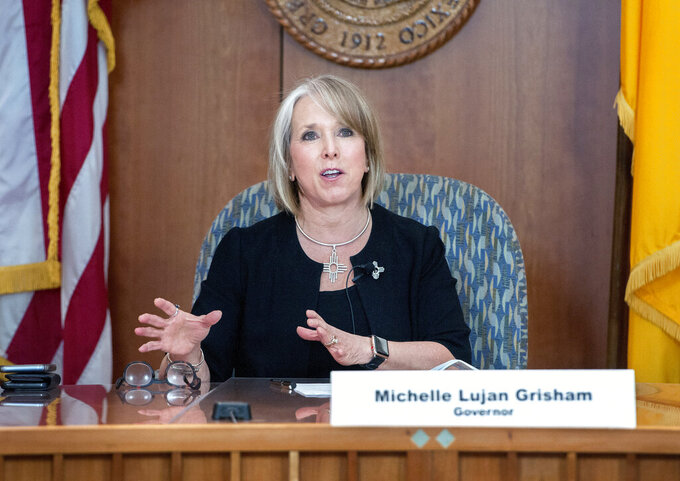 FILE - In this April 15, 2020 file photo New Mexico Gov. Michelle Lujan Grisham gives an update on the COVID-19 outbreak in the state Capitol during a news conference in Santa Fe, N.M. The leader of one of the largest Native American tribes in the U.S. called Wednesday, June 23, 2020, on Lujan Grisham to end efforts to fight a court ruling that orders improvements in education for members of his tribe and other vulnerable groups. (Eddie Moore/The Albuquerque Journal via AP, Pool,File)

SANTA FE, N.M. (AP) — It will be up to a state district judge to consider dueling motions Monday to dismiss or more aggressively enforce a 2018 ruling that found the state failed to provide New Mexico children a sufficient education.

The lawsuit filed by Hispanic and Navajo plaintiffs is a driving force in educational policy in a state where per-student spending and educational achievement hover near the bottom of national rankings.

Plaintiff and Navajo mother of three Wilhelmina Yazzie, believes the court needs to enforce the broad and sweeping order that mandated the state to increase funding and supervise equitable and culturally-specific resources for underserved populations.

“They're suggesting that they don’t need a court order to fix our education system and to simply trust them to do their job. But trust is a big word,” Yazzie said, noting the contentious history between Indigenous people and the government.

After 18 months in office with members of her party in control of both houses, Democratic Gov. Michelle Lujan Grisham argues her administration is on its way to addressing the previous ruling by the late Judge Sarah Singleton.

Lujan Grisham has acknowledged that New Mexico’s public education system has operated for years with unacceptable deficiencies for students of color and students from disadvantaged socioeconomic backgrounds. Spokeswoman Nora Meyers Sackett said the governor dropped the state’s appeal of the lawsuit, launched by her predecessor, when she took office.

The lawsuit was filed in 2017 when Republican Susana Martinez was governor.

The coronavirus pandemic has raised the stakes, decimating government revenues that could be used to address the exacerbated inequities facing low-income and rural students who are often Indigenous.

A fifth of all students lacked internet access at home when New Mexico schools shut down due to COVID-19, according to a March survey cited by legislative researchers. Only half of students in Bureau of Indian Affairs schools had internet access.

“I live in the city limits so I have internet access and I have a laptop, and then we have another one, an extra one,” said Yazzie, a paralegal from Gallup. “But some of our students that live in the rural areas? Not so much.”

Yazzie joined the lawsuit after she learned her son Xavier was scoring poorly on state testing despite getting good grades. He was passed over for advanced classes. Her daughter Cimimila, 4, made it off a waiting list for pre-kindergarten. The lawsuit argues that up to 30% of eligible students in some districts aren't so lucky.

“Our communities and our children are suffering. They have been suffering even way more before but this whole pandemic happened,” Yazzie said.

Schools around the state say they rushed into action after the shutdown and got students laptops and internet access at home. There's hope that the inequities will be less severe in August when schools restart on a hybrid schedule with most students attending two days per week.

On Monday, Judge Matthew Wilson will hear arguments on the case for the first time. Singleton had ordered the state to fix funding and inequality issues by April 2019.

New Mexico Center on Law and Poverty lawyers representing Yazzie will argue that the state fell short and will ask the court to compel the state to comply with the order. Colleagues with the Mexican American Legal Defense and Educational Fund will press to reopen discovery against the state and derail the state's motion to dismiss on technical grounds.

In asking Wilson to dismiss the case, the governor is trying to maintain the independence of the Public Education Department.

“​The intent of the motion to dismiss is not to disagree with the critically necessary rebuilding and restructuring of New Mexico’s public education — it is to ensure that educational policy is set by education experts, not by court decree,” Meyers Sackett said.

During a special session this month, legislators scaled back teacher raises and other increases in education funding due to a budget shortfall brought on by the pandemic. Democratic representatives also proposed a non-binding resolution opposing the governor’s motion to dismiss the case, but after a closed-door meeting, senior leadership said it wouldn't come to the floor.

“We might need (the lawsuit) as leverage,” said Democratic Rep. Joanne Ferrary of Las Cruces, who supported the resolution. “I personally trust that the governor has done what she can.”

“That is the reason why we filed the lawsuit in the first place,” she said.

Attanasio is a corps member for the Associated Press/Report for America Statehouse News Initiative. Report for America is a nonprofit national service program that places journalists in local newsrooms to report on undercovered issues.