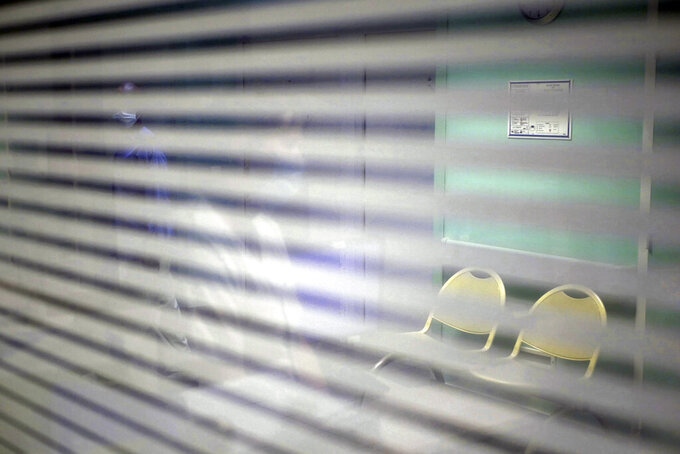 A patient walks on a corridor at the emergency ward of the Rouvray psychiatric hospital, in Rouen, western France, Wednesday, Nov. 25, 2020. Lockdowns that France has used to fight the coronavirus have come at considerable cost to mental health. Surveying points to a surge of depression most acute among people without work, in financial hardship and young adults. (AP Photo/Thibault Camus)

ROUEN, France (AP) — The panicked 22-year-old is led to Consultation Room No. 2, with its easy-mop floor and honeycombed meshing over the window. Behind her, the psychiatric emergency ward's heavy double doors — openable only with a staff member's key — thud shut.

With anxious taps of her white sneakers, she confides to an on-duty psychiatrist how the solitude of the coronavirus lockdown and the angst of not finding work in the pandemic-battered job market are contributing to her maelstrom of anxieties. She is unnerved that she is starting to obsess about knives, fearful that her mental health might be collapsing.

“The lockdown — let's not pretend otherwise — worries me," the young woman explains through her surgical mask, as the psychiatrist, Irene Facello, listens intently.

“I want to be reassured,” the woman says, “that I'm not going mad.”

Forcing millions of people to once again stay home — cutting them off from families and friends, shuttering businesses they invested in, university classes that fed their minds and nightspots where they socialized — has, for now, begun to turn back the renewed coronavirus surge in France that pushed it in November past the bleak milestone of 52,000 dead.

But the costs to mental health have been considerable. With numbers now falling for French COVID-19 patients in intensive care, psychiatrists are facing a follow-up wave of psychological distress. Health authorities' surveying points to a surge of depression most acute among people without work, those in financial hardship and young adults.

The Rouvray Hospital Center in the Normandy town of Rouen is among places where psychiatrists are finding themselves on the front line of the pandemic's mental-health fallout. They are fearful that a growing crisis of depression, anxiety and worse may be on the horizon as more livelihoods, futures and hopes are lost to the pandemic. Associated Press journalists spent 10 hours in the sprawling 535-bed facility, the day after French President Emmanuel Macron laid out a blueprint stretching into mid-January for the gradual lifting of lockdown restrictions.

At the psychiatric emergency unit, as Facello sends the 22-year-old home with a prescription for anti-anxiety drugs and an appointment to see her again in two weeks, the double doors swing open once more.

It is another young woman, aged 25, a linguistics student. She is steered to Consultation Room No. 1, where she sits silently in the gloom as night falls.

On the ward's whiteboard, which lists patients’ names and details, an abbreviated initial diagnosis handwritten on a slip of paper uses acronyms to spell out how closely she may have brushed with the irreparable. For the past week, it says, she'd suffered "IDS” — suicidal ideas — and imagined “IMV,” or voluntarily ingesting medicines.

The ward's chief psychiatrist, Sandrine Elias, gently teases out of the student how the lockdown has left her completely alone, with classes suspended.

It isn't the sole cause of her malaise. Elias learns that the young woman had a difficult adolescence, with suicide attempts. Isolation during the epidemic has only amplified the student's distress. In a quiet voice, she tells Elias that it “confronts us with ourselves."

"I'm a stay-at-home type of person, but this absolute constraint is a real weight," she says.

Elias promptly decides to hospitalize her. Supervised rest and medication, Elias determines, can help her through.

“You need a framework, to be taken into care. All alone, in your studio apartment, it's not possible," the psychiatrist says. “It's very good that you came here.”

Not all of those seeking help have previous psychiatric histories. Mental health professionals say lockdowns and curfews have also destabilized people who, in less challenging times, might have surmounted difficulties by talking them through with family and friends rather than ending up in psychiatric treatment wards.

“Being alone between four walls is terrible,” Elias says. “The halting of life like this, it reverberates on people. It is not good."

Nathan, a 22-year-old student, came through the emergency ward two days earlier. The log book shows he was admitted at 5:20 p.m. and was moved that evening to a longer-stay unit.

There, in Room 14, he told psychiatrist Olivier Guillin that he'd sought emergency help “because I felt that my morale was declining very rapidly, that I was at the point of tipping over, with suicidal thoughts.”

Similar thoughts had first laid him low in the summer, after France's initial lockdown from March to May. They struck again when the country was confined for a second time from Oct. 30. His university shuttered. His political science classes went virtual. Rather than be alone in his student flat, he moved back with his parents in Rouen, severed from his support network and ruminating on his uncertain future.

“The first lockdown didn't really have much of an effect on me,” he tells Guillin, but the second one “really sank me."

“Being confined again, having to always stay in a limited perimeter, not being able to see my friends as often as usual, it disordered me,” he says.

The security of hospitalization and medication have quickly started to stabilize him. Resting on his bedside table was a Rubik's Cube that he'd solved.

Guillin, who heads several units at the hospital and has 200 medical staff working under him, says they are seeing a sharp increase in young adults seeking help with anxieties, depression, addictions and other difficulties. He's bracing for more.

“We’ll very likely see the crest of the wave in the months to come,” he says.

The pandemic has also had other mental health repercussions that are less evident but no less devastating.

Guillin still rues the death of a patient who killed herself during the first lockdown, 48 hours after what turned out to be their final appointment. She wore a mask to that meeting, to protect against the virus. It interfered with his reading of the depth of her distress, he says.

“She was a very expressive lady and there, with the mask, I incorrectly evaluated things,” he says. “Retrospectively, I tell myself that perhaps, without the mask, I would have been more alert and done more.”

Patients have also been hurt by the diversion of resources from mental health to battling COVID-19.

The electroconvulsive therapy that had been helping Laura, a student, emerge from her severe depression was thrown into disarray when anesthesiologists — who are needed to put her to sleep while electrical currents passed through her brain — were requisitioned to care for virus patients.

“My morale went downhill shortly after that, and the suicidal ideas came back,” she tells Guillin.

Laura says for her, the therapy is “as urgent as COVID-19." She says prioritizing virus patients "is a bit stupid and mean.” Now, instead of being released from the hospital by mid-November as she'd hoped, Laura has had to stay.

In the emergency ward, for the third time in two hours, another young woman comes in through the double doors, dressed in black, looking hollow. With Room 1 already occupied by the 25-year-old, the 18-year-old high school student is shown into Room 2. After her initial interview by a nurse and a caregiver, she curls up on her chair.

The nurse, Sebastien Lormelet, and the caregiver, Anita Delarue, exchange notes in the staff room where the teenager's name and admission time, 5:02 p.m., are written in black marker on the whiteboard.

“The lockdown has a lot to do with it, because she says that the first one was hard. With the second one, now, if she could slip away, she would," Delarue says.

"She wouldn't withstand a third one.”